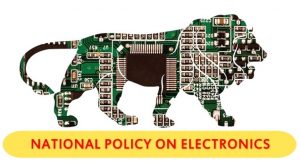 The government is expected to bring, this financial year, an ambitious national electronics policy that seeks to position India not only as a production hub to serve the booming domestic market but also for exports. The proposed policy that spans diverse areas ranging from medical electronics to mobile phones and automotive will underscore India’s growing manufacturing prowess, right down to the level of components and subassemblies, and pitch its deeper value addition capabilities. It will also leverage the country’s existing strengths in electronics design, given that nearly 75 percent of global technology majors have Research and Development (R&D) presence in India, a senior IT Ministry official said.

“The draft policy will be put up for public consultation in a month or so, and we expect it to be finalized by the second half of the current fiscal,” said the official who did not wish to be named. The current thrust now is to incentivize maximum value addition, and the duty structure is geared towards encouraging players to bring in raw modules and components for assembly.

“For instance, this year if you bring PCBs (printed circuit boards) which are already populated meaning all the components are mounted on it, then it attracts a duty. But if you bring the raw PCBs and components and do the entire process here, the costs are lower,” the official said. The IT Ministry official said that the country will now be moving towards incentivizing the export of electronics products manufactured in India, too.

“In our new policy, the direction will be that we will like to provide strong ecosystem, so companies come in and manufacture not just looking at the Indian market but also exports,” the official noted. The effort thus far was to attract more and more of sub-assembly makers and module makers and by next year the focus will also be on components like resistors and capacitors.

“We are trying to bring global sub-assembly manufacturers into India. As we grow our manufacturing size and scale, it is strategically in the interest of Taiwan, Korea, Japan and others to have a larger foothold in India,” the official added.

Electronics and IT Minister Ravi Shankar Prasad had met Japan’s Minister of Economy Trade and Industry, Hiroshige Seko, to discuss wide ranging issues, including the creation of start-up hub, cooperation in the field of cybersecurity, and highlighted the “mutually complementary relationship” that the two countries share.

“We feel strongly that it is in the interest of units in countries like Japan to come and set up base here….Especially Japan, which has a lot of high-tech and machinery and they specialise in the niche area of precision and high-quality machinery, which we import,” the official pointed out.

(With Inputs from PTI)

Intersil is now a wholly-owned subsidiary of Renesas Electronics