Nano Architectured Material that is tougher than Steel and Kevlar 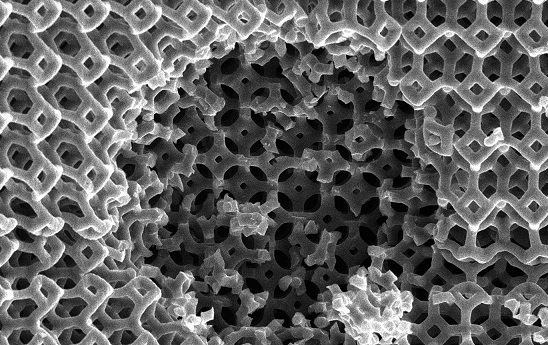 A joint research project’s findings have just been published in the journal Nature Materials from engineers from MIT, Caltech, and ETH Zurich that has yielded a “nano-architectured” material that could prove stronger than Kevlar and steel. This material, once scaled, could provide a means of developed lightweight, protective coverings, blast shields, and other impact-resistance materials and armors for various industries.

By using nanometer-carbon struts, the new material has been shown to have impressive toughness and mechanical robustness. The material was tested by firing microparticles at supersonic speeds to see how it deforms — quite well, it turns out.

The material is less than a width of a human hair, but still able to prevent the tiny, high-speed particles from penetrating it. According to the researchers behind the project, when compared with steel Kevlar, aluminum rother impact-resistant materials of comparable weight, the new nanotech armor outperforms them all.

This could potentially mean that when produced on a larger scale, the new material should be able to provide a very tough, lightweight, alternative to more conventional impact-resistant materials (lie Kevlar or steel plate).

“The knowledge from this work… could provide design principles for ultra-lightweight impact-resistant materials [for use in] efficient armor materials, protective coatings, and blast-resistant shields desirable in defense and space applications,” added the study’s co-author Julia R. Greer, a professor of materials science, mechanics, and medical engineering at Caltech. This new nanotech armor is potentially tougher than Kevlar but much lighter.

To test the toughness of their new material, engineers decided to bombard it with supersonic particles and study how it reacted. This was first conducted at Caltech who used a piece of the nanomaterial fabricated using two-photon lithography to make a tetrakaidecahedron (a lattice configuration composed of microscopic struts).

This structure, the study authors note, has historically been used in energy-absorbing foams. The reasoning behind this is that carbon is normally pretty brittle, but this 3D structure should provide it with the flexibility needed to deform rapidly without completely breaking.

Once fabricated, the material was washed to remove leftover resin and it was then baked in a high-temperature vacuum furnace to convert the polymer into an ultralight, nanostructure of pure carbon.

With the material ready, it was subjected to high-energy impacts of 14-micron-wide silicon oxide bullet-like particles. The particles were accelerated to supersonic speeds using lasers focussed through a gold- and silicon oxide-coated glass slide.

This process results in the generation of plasma from the gold with pushes particles of the silicon oxide out in the direction of the laser — very rapidly. This setup allowed the researchers to precisely control the speed of the fired microparticles so that they could test speeds of between 89.5 mph (40 meters per second) to 2,461 mph (1,100 meters per second).

For reference, the speed of sound is 761 mph (about 340 meters per second) at sea level.

The impacts were captured using high-speed cameras and the results carefully studied to see how the material reacted. Using two different densities, they found that the more dense variant (with thicker struts) was more resilient and particles tended to embed within the material rather than tear through it.

ST Partner Program, 300 Partners to Create a Unique Ecosystem and Bolster the Industry