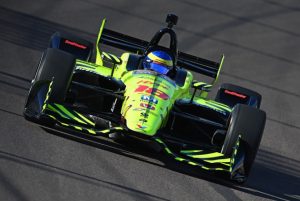 Following a career-best qualification performance at the Indianapolis Motor Speedway, Sebastien Bourdais pilots the Mouser-sponsored No. 18 car at the famed Indianapolis 500 on May 27. Bourdais was fifth after yesterday’s first round of qualifying putting him in the Fast-Nine with a chance to run for the pole. He was fifth of the nine drivers to make an attempt in the Fast-Nine Shootout and recorded a four-lap average speed of 228.142 mph, making him the fastest of the Honda-powered cars. Just one year ago, Bourdais survived a horrific crash in the first qualifying round for the race. He suffered multiple fractures to his pelvis and a broken right hip, forcing him to sit out most of the 2017 season.Bourdais’ inspiring recovery allowed him to return to the series, scoring a top-ten finish in his first race back.

Mouser Electronics, the industry’s leading new product introduction distributor with the widest selection of semiconductors and electronic components, is proud to again team up with valued supplier Molex to sponsor Bourdais and the Dale Coyne Racing with Vasser-Sullivan team for the 2018 Verizon IndyCar Series.Bourdais, driving the Mouser- and Molex-sponsored No. 18 car, won the 2018 IndyCar Series opener at the Firestone Grand Prix of St. Petersburg in stunning fashion, overcoming a flat tire and multiple course cautions to take the checkered flag. Bourdais was the defending champ at St. Petersburg, having won in 2017 once behind the wheel of the Mouser- and Molex-sponsored entry. “Bourdais was amazing during qualifications last weekend, outpacing all of the other Hondas on the track and lining up a top-five start,” said Todd McAtee, Mouser Electronics’ Vice President, Americas Business Development. “We’re happy to team up with Molex to sponsor the No. 18 car and a driver with the heart and talent of Bourdais.”Mouser first sponsored IndyCar racing in 2011 as an inventive way to communicate its performance-driven business model and promote the newest technologies. The Mouser- and Molex-sponsored car won the Indianapolis 500 in 2013.

“All of us at Molex are honored to once again join Mouser to sponsor the Dale Coyne Racing with Vasser-Sullivan No. 18 car,” said Fred Bell, vice president of Global Distribution for Molex. “Our sponsorship gives us the opportunity to further demonstrate our commitment to developing innovative products that help advance the automotive industry.” After the Indianapolis 500, the series travels to Chevrolet Dual in Detroit on June 2 and 3, DXC Technology 600 at Texas Motor Speedway on June 9, plus seven more races before ending the season at the Grand Prix of Sonoma on September 16.