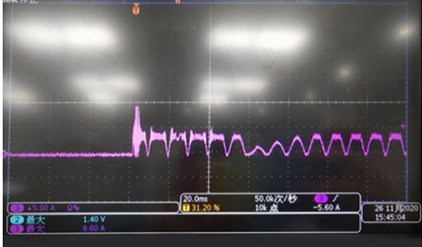 This paper focuses on analyzing the causes of contact short-circuit failure after incorporating the relay. In terms of principle, experimental test, verification, and relay materials, we analyze the problems of the relay in the process of circuit design and applications in detail, so as to provide a reference design of the relay in switching power supply.

Failure and its Causes

When we applied the PFC circuit in Figure 1 to the product and tested it, we found that the inrush current exceeded the standard (design objective ≤25A) and reached 70A. If the Inrush current Imax of this case is calculated according to the theory, the resistance value of thermistor RT1 in this scheme is 10Ω, and the input voltage is 90VAC.

According to Figure 1, the devices that affect the input inrush current are mainly thermistor RT1 and relay K1, which have the following four combinations:

1) When the thermistor is open-circuit and the relay is suspended, the input is disconnected and the circuit is not turned on.

4) When the thermistor is working normally and the relay is sucked, the input current is mainly supplied to the back-end circuit through the relay. The thermistor does not work in the circuit, and the input inrush current is large.

Conclusion: Tested the thermistor and relay, and we found that the thermistor resistance is normal, and the normally open contact of the relay is sucked without a power supply, that is, the relay is abnormal device. After replacing a new relay, the measured inrush current is only 7.4A. In the previous test, the inrush current exceeding the standard belongs to the assumption ④.

III. The operating principle of circuit in Figure 1

The operating principle of circuit in Figure 1 is that relay K1 is connected in parallel to thermistor RT1, and powered by the auxiliary winding of PFC inductance L2 after linear voltage stabilization. When the switching power supply is powered on, as relay K1 has no power supply voltage at this time, relay K1 is in an open-circuit state, and the input current charges the large electrolytic capacitor C8 through thermistor RT1, thus limiting the input inrush current of startup.

When the power tube Q1 receives the driving signal, the auxiliary winding voltage of PFC inductance L2 is established, that is, the power supply voltage of relay K1 is established. When the power supply voltage reaches about 9V, the relay starts to work, the relay contact is closed and the thermistor RT1 short-circuits, so as to reduce the input line impedance and loss and improve the efficiency of the product.

When the relay is not powered on and the normally open contact has been closed, that is, the relay contact is short-circuited. There are generally three possibilities accounting for the failure. The following possible causes are analyzed and investigated one by one:

1) The operation frequency of the relay is too high, and the times have exceeded the switching times that the relay can bear.

2) The surrounding temperature of the relay is too high.

3) The surge current flowing through the relay is too large.

Through the analysis of the operating principle of the circuit in Figure 1 and the monitoring of the voltage at both ends of the contact of relay K1, we found that K1 only operates during power on, and the contact will not switch after normal operation.

[The yellow waveform is the input voltage and blue one is the relay contact current.]

Through measurement, as shown in Figure 2, the contact current of the relay is about 3A and the surrounding temperature of the relay is 83 ℃. Referring to the relay specification applied in this case, it is indicated that the surrounding temperature resistance parameter is 10A / 85 ℃, which can be used at 105 ℃ when the input current is 7A. Compared with the actual environment and current, it can be ruled out that the failure is caused by the high temperature.

[The yellow waveform is the input voltage and blue one is the relay contact current.]

The load of relay K1 is inductive load (L1, L2) and capacitive load (C1, C2, C8). The measured contact current of relay K1 is shown in Figure 3. From the figure, it can be found that the relay K1 has peak contact current within a period of time after conduction, with a maximum peak of 39.4A. The maximum withstand current of the relay is 10A, and the surge current (39.4A) generated during product commissioning will damage the contact and lead to suspension.

1) Whether PFC inductance L2 is saturated?

3) Whether π type filter capacitor C1 is too large?

4) Whether the PFC limit clamp current is too large?

The parameter of the differential mode (DM) inductor L1 is 200uH/48Ts/0.7mm. The measured saturation current is shown in Figure 6. When 13.1A current (the Ipeak when PFC is started) is applied, the inductance is only 12.5uH, the inductance decreases sharply showing that saturation has occurred. At this time, the inductor L1 of the π-filter can not effectively filter the current flowing through relay K1 during the startup of PFC.

At the same time, it can also increase the inductance of L1 during startup and increase the effect of PFC π filter, as shown in Figure 11, the maximum contact peak current is 9.6A. The PFC current sampling resistance is related to the overcurrent capacity of the product. Generally, it is not recommended to change this resistor after the overcurrent point is designed.

In conclusion, the large inrush current generated after the relay at the input end is closed can be summarized as follows: the current sampling resistance of PFC is small, that is, the overcurrent point is large, and the input current reaches the clamp point when the PFC starting work (boosting). If the DM inductor of π filter is saturated, it will lose the suppression of current. The larger the capacitance of filter capacitor C1, the larger the distorted current pulse.

1) π-filter circuit at the input: selecting the DM inductor with larger saturation current and reducing the capacitance of the first capacitor in π-filter at the same time.

2) Increase the PFC current sampling resistance and reduce the PFC clamping current (this should be balanced with the overcurrent capacity required by the product).

In addition to optimizing the parameters from the circuit, the selection of the relay is also critical. The following will take HONGfa relay HF46F-G series as an example to introduce the difference of its contact material in different applications.

1) AgSnO2 is often used in applications that will produce surge current, such as capacitive load, inductive load, motor load, etc.

2) Agni is often used in the context of resistive load and current stability.

For the relay application used at the input of switching power supply, the actual load will generally have devices such as inductance and capacitance that cause surge current, so the relay with AgSnO2 as contact material should be used.

With wide operating temperatures, MORNSUN’s products can resist extreme outdoor environmental conditions and have good EMC performance when encountered with high-voltage surges such as lightning strikes. MORNSUN’s line of products complies with universal standards to ensure your safety.