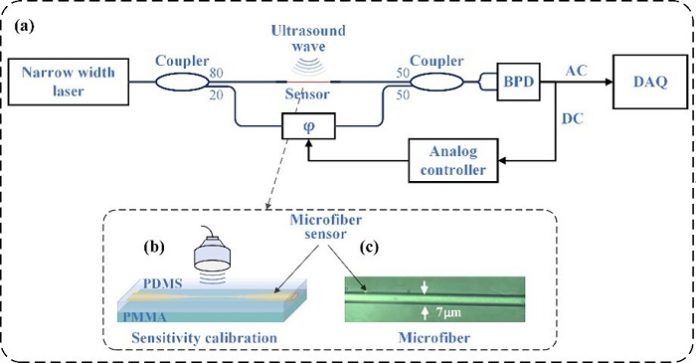 As the key element of the photoacoustic imaging system, ultrasound sensors directly decide the imaging performance. The mainstream ultrasound sensors are based on the piezoelectric effect, which converts mechanical waves into electric charges. The sensitivity of such sensors is related to the size of piezoelectric elements. To achieve sufficient sensitivity, millimeter-scale piezoelectric elements are required, which limits the miniaturization of the device. As a special optical fiber with a size of several microns or hundreds of nanometers, microfiber has the characteristics of small size, large evanescent field, and high sensitivity to the environment. So, can it be applied to ultrasound sensing with high sensitivity?

The research group of Prof. Qizhen Sun from Huazhong University of Science and Technology proposed a miniaturized microfiber ultrasound sensor. Highly sensitive ultrasound detection was demonstrated using microfiber with a large evanescent field and environmental sensitivity. Further, the photoacoustic imaging system based on the microfiber sensor was first realized, to the best of our knowledge.

Researchers optimized the dimeter of microfiber to 7μm in view of the larger evanescent field. As shown in Fig.1b, the sensitivity of the sensor is further enhanced by using the Polydimethylsiloxane (PDMS) material with a high elastic-optical coefficient to encapsulate the microfiber. When the ultrasound wave is applied to the sensor, the refractive index of PDMS will change correspondingly due to the elastic-optical effect, resulting in the modulation of the effective refractive index of the microfiber. A Mach-Zehnder interferometer is constructed to demodulate the phase changes of the interrogation laser induced by the incident ultrasound waves. A feedback stabilizer based on the Proportion Integration Differentiation (PID) method is used to compensate for the low-frequency fluctuation caused by noise. The experimental results show that the sensitivity of linear microfiber ultrasound sensors is improved by one order of magnitude compared with standard single-mode fiber sensors. The sensor exhibits a low noise equivalent pressure of 153Pa and a broad response bandwidth up to 14MHz (-10dB). In addition, the sensor can be used for the detection of weaker signals, by optimizing the microfiber and detection system to improve the sensitivity and bandwidth of the sensor.

The research group also demonstrated a photoacoustic imaging system based on the microfiber sensor. The performance of the imaging system is evaluated by imaging three human hairs. The signal-to-noise ratio (SNR) of the system could reach 31dB even at the depth of 12mm. The axial and lateral resolutions are 65μm and 250μm at 5mm depth, respectively. This technology is expected for high resolution, large imaging depth, and side photoacoustic/ultrasound imaging, which has important significance and application value in human health examination and biological science research.