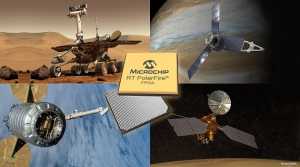 Microchip Technology announced it is shipping engineering silicon for its RT PolarFire Field Programmable Gate Array (FPGA) while the device is being qualified to spaceflight component reliability standards. Designers can now create hardware prototypes with all the same electrical and mechanical performance that the space-qualified RT PolarFire FPGAs will provide for high-bandwidth on-orbit processing systems with industry-low power consumption and the ability to withstand radiation effects in space.

“This is a major milestone as we release RT PolarFire FPGA engineering silicon to our customers and begin the spaceflight qualification process through full QML Class V standards,” said Bruce Weyer, vice president of Microchip’s FPGA business unit. “Many of our customers have already jump-started satellite system payload development using our commercial PolarFire MPF500T FPGAs and now all prototyping can be done with silicon that will be identical in form, fit and function to our eventual flight-qualified RT PolarFire FPGAs.”

For more information, visit the Microchip website at www.microchip.com