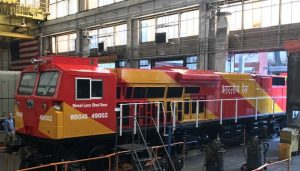 The locomotives have been made under the USD 2.5 billion agreement signed in 2015 as part of the ‘Make in India’ program to develop and supply 1,000 fuel-efficient diesel-electric Evolution Series locomotives.

“Today marks a paradigm shift in diesel locomotive family. I would like to compliment GE for this new generation fuel-efficient locomotive. The localisation aspect of this locomotive will eventually go up to 70 percent making it a perfect example of Make in India. It is indeed a historic achievement for GE, Indian Railways as well as the Northern Railways,” Ashwani Lohani, Chairman Railway Board, said at the event.

The 4500 HP diesel-electric locomotives use cutting edge technology to ensure higher fuel efficiency and emission compliance to international emission standard UIC1, and are digitally enabled for predictive analytics to set new standards for reliability and availability, a GE statement said.

The locomotives will have close to 70 percent localised content through investments in India by global and local suppliers. The locomotives have been designed taking into consideration basic comforts of loco pilots in terms of air-conditioned operator cab, noise pads for a reduction in noise level, heated windscreens, urinals and digital displays, the statement said.

“Our strong partnership with Indian Railways is aligned to Government of India’s railway modernisation and “Make in India” efforts. The timely delivery of the first two locomotives and the unveiling of the Roza maintenance shed have been made possible owing to a strong commitment from the GE team in India and globally, working closely with Indian Railways,” said Nalin Jain, President and CEO- International, GE Transportation.

GE also unveiled the state-of-the-art Roza maintenance shed in the Shahjahanpur district of Uttar Pradesh. The maintenance shed which has been built on 20 acres with an investment of Rs 200 crore will be equipped for digital monitoring of the GE Evolution Series diesel locomotives (4500 and 6000 horsepower) and will have a modern training institute for railways’ pilots.

It will have a team of globally certified technicians and will use analytics-based maintenance practices to deliver improved asset availability and reliability for the diesel locomotive fleet.