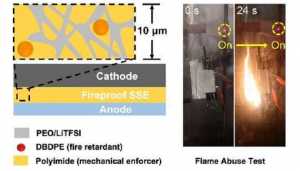 Lithium-ion batteries are in everything from cell phones to cars. However, recent incidents involving fires or explosions of these devices show there’s a need for safer batteries. One option is to replace the flammable liquid electrolyte with a solid-state electrolyte (SSE). But some of the most-studied SSEs are themselves flammable, leaving the original safety concern unaddressed. Researchers now report in ACS’ Nano Letters that they have developed an SSE that won’t burn up.

Traditional lithium-ion batteries consist of a cathode and anode, separated by a liquid electrolyte and a thin piece of porous plastic. If the battery is damaged — for example, if it is overcharged or if needlelike lithium projections grow and pierce the plastic separator — the electrolyte can catch fire. Scientists have experimented with a variety of solutions, such as adding fire retardants to the electrolyte, or replacing the soft and flammable separator and electrolyte with an SSE. However, state-of-the-art SSEs have their own limitations, including brittleness and heaviness. Fragility can be reduced by using a polymer SSE, but lithium needles can still breach these soft materials. Polymer/ceramic composite SSEs get around that problem, but most of these materials are still flammable. Yi Cui and colleagues wanted to design a safer alternative.

The team developed an SSE composed of a porous mechanical support (a polyimide film), fire-retardant additive (decabromodiphenyl ethane), and polymer electrolyte (polyethylene oxide/lithium bis[trifluoromethanesulfonyl]imide). The researchers say this is the first ultralightweight polymer-based SSE that is fireproof. In fact, a battery they made from this SSE continued to function well even when it was exposed to flames. In addition, the new SSE can provide an energy density and performance at least comparable to conventional lithium-ion batteries. 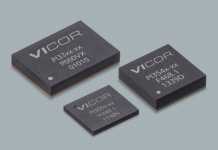 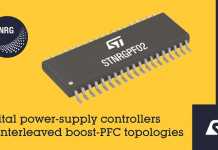 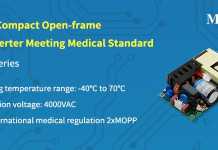