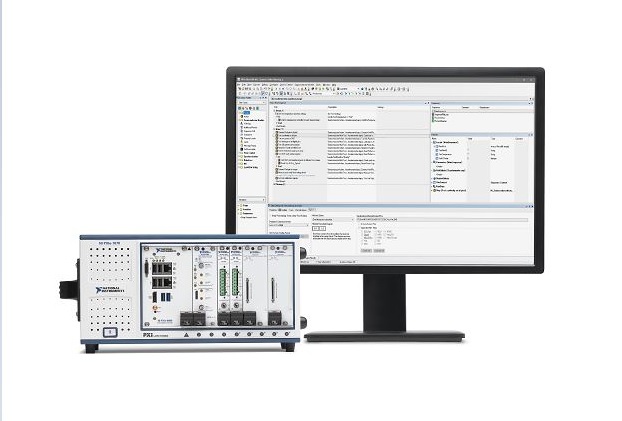 Test and manufacturing engineers increasingly depend on software to perform their job responsibilities quickly and efficiently. Over the past four decades, test and manufacturing engineers have become more productive with NI’s open, software-centric platform that’s uniquely engineered to take advantage of modular hardware and an expansive ecosystem. Through the latest version of LabVIEW NXG and the recent introduction of SystemLink, NI is further extending its ability to accelerate development and create efficiencies throughout the entire test workflow. As the only vendor with a software portfolio that scales from the I/O pin on an FPGA to remote test system management, NI is revolutionizing the workflow for building a test system.

Designing and Procuring Your Test System

The list of hardware decisions for a new project goes on and on—instrumentation, cables, connectors, switch topology, mass interconnects, rack layout, power budgets and thermal profiling, and so on. After hardware decisions have all been finalized to ensure measurement quality, the last thing you need is for software to end up being the bottleneck to your productivity. To help simplify initial system setup, NI Factory Installation Services install selected software environments and necessary hardware drivers onto new controllers.

Configuring and Validating Your Setup

Applications developed in software are tightly coupled with their hardware setups, so users deserve a cohesive management solution that simplifies this fundamental relationship. Through the latest version of LabVIEW NXG, NI is introducing a new graphical canvas for the visual configuration of physical systems called SystemDesigner, which brings hardware configuration, diagnostics, and system documentation into the LabVIEW NXG environment. If a particular NI or third-party driver is not installed, SystemDesigner guides you to install the necessary driver through NI Package Manager, a new interface built on industry-standard package formats.

When validating initial circuits boards for a design, chances are high that certain tests will need to be run repeatedly. Performing the same test by hand several times is tedious and, even more importantly from a business standpoint, inefficient. The team’s precious time should be mainly spent focusing on requirements and engineering design tweaks rather than wasting time on logistical tasks that can be automated instead. Once this mindset has been adopted, the main barrier is the tests’ creation, given that programming experience among a team of hardware and test engineers can vary widely.

LabVIEW NXG provides a graphical approach to programming and lets you program how you think, connecting functional blocks to build the logic of the application. In addition, user interface (UI) design is streamlined through a drag-and-drop approach that helps you intuitively create professional UIs for your test code. The latest version of LabVIEW NXG further extends these capabilities from the desktop to the web, so even if you have no web programming experience, you can design and deploy web-based UIs that can run test code in any modern web browser without plugins or installers.

When a product moves from R&D validation to final manufacturing test, it is crucial to keep device test time low so that total unit throughput is maximized. Instrumentation reuse between design validation and production reduces measurement correlation efforts between these two phases and adds efficiency to the software scaling as well. TestStand is a ready-to-run test management environment and framework that simplifies the design of your production test system. TestStand can call code modules written in almost any programming language, allowing your group to reuse tests.

Deploying and Maintaining Your Testers

Most large test systems are not architected in isolation; they represent solutions for multiple test sites or for an entire production floor. TestStand simplifies this process using its built-in deployment utility, which deploys the test sequence alongside its code modules and required run-time drivers.

Software Is the Key

Between LabVIEW NXG, TestStand, and SystemLink, NI software accompanies you throughout the entire workflow of building, deploying, and maintaining a test system. Beyond the individual innovation within each of these products, the collection represents the fruition of NI’s commitment to its ongoing investment in software. This unique combination of software products and their inherent interoperability separates NI’s platform from the rest. Let software interoperability accelerate your workflow—it’s the smarter approach to test.