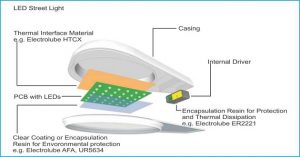 The LED market must surely represent one of the fastest growing sectors within the electronics industry and LEDs are now utilised in all types of lighting, signage and domestic appliance products. LEDs offer many advantages over traditional lighting in the form of adaptability, lifetime.

Specially designed and formulated chemical products are widely used in the electronics industry for a vast array of applications. Whether it is during PCB manufacture or for the protection of components or complete devices, such products have become an essential factor in ensuring the performance and quality of electronic devices.  Specifically in LED applications such products can be used to assist Design Engineers in protecting LED systems in a variety of conditions, including the installation of lighting designs in corrosive environments, for example. Due to the design freedom that LEDs offer, applications are becoming more diverse and challenging and as such, aesthetic results must be achieved in conjunction with the consideration of reliability and lifetime of the product. In addition, specialist chemical products can also be used as part of the design for cosmetic reasons as well as helping to provide key functional improvements such as increased efficiency and reduced energy consumption.

The environment that the LEDs and associated electronic components are used in will have an effect on the type of product required to protect the system and ensure reliability. Environmental challenges can be in the form of corrosive environments; when high humidity, salt mist or corrosive gases are present, for example. Due to the potential variety of LED applications it is also possible that UV exposure, water immersion or chemical exposure may make up part of the operating environment. It is therefore imperative that the end use application is fully understood to ensure the correct protection media is applied.

Where protection directly over the LED is required there are a number of points that must be considered. The clarity of the material applied is crucial to ensuring the maximum utilisation of light output from the LED. In addition, any potential changes to the colour temperature, clarity of the material or light output of the LED during operation must also be considered. Protection can be offered in the form of conformal coatings or encapsulation resins, with the choice between the two being determined by the severity of the operating environment and the desired aesthetic effect.

To discuss this in more detail, some example applications can be considered. LED signage is a rapidly growing industry, with LEDs offering more choices for design as well as providing affordable and efficient interactive displays. Depending on where the sign is placed and the design of the unit, the level of exposure to environmental conditions can differ. A roadside sign, for example, would be sealed from the elements (usually in an IP rated case) but the possibility for moisture ingress and condensation forming on the board is still apparent, particularly due to the changing temperature conditions. The condensation may also have some salt content and there may be prolonged exposure to UV light. In this situation, we would expect an acrylic conformal coating, such as Electrolube’s AFA, to offer the required protection against humidity and salt mist whilst also maintaining its clarity after exposure to UV light. Consideration into the unit design and possibility of standing water forming on the PCB would have to be considered; if water was to constantly run over the board or ingress into the unit over time, the protection level required may increase.

Another example would be the use of LED signage where exposure to corrosive gases could be possible. Corrosive gases can penetrate through coatings and on through the LED lens, discolouring the LED chip and in turn, dramatically reducing the light output and efficiency of the LED. Thus, the level of exposure to the corrosive gases is important. For a pricing sign in a fuel station, it is likely that the fumes given off are not concentrated enough to affect the LEDs in the forecourt display and so, a conformal coating would be recommended to protect against the general environmental conditions as discussed above. However, in the case where corrosive gases are present in high concentrations, a more sufficient barrier is needed. Applications such as industrial lighting or lighting for agricultural or livestock environments will need to use encapsulation resins to ensure the corrosive gases present do not penetrate through to the LED during the lifetime of the product. The following graph indicates the different levels of protection expected from various coatings and encapsulation resins; it is important to note that silicone resins are permeable to gases, hence the poor performance in such applications.

Other LED applications may include those that require some physical protection as well as providing a barrier to environmental influences. An example application is LED strip lighting for floor luminaires in a shopping complex. The luminaires are both functional and part of the aesthetic design of the complex and will experience a high level of traffic passing directly over the resin used to protect the LEDs in the unit. Firstly, a conformal coating will not offer the physical protection required due to it being applied in a thin film (<200 microns). When looking at encapsulation resins as an alternative, it may be assumed that a tough epoxy would offer the best physical protection for the unit. However, there are two things to consider with this product selection; UV exposure and cosmetic wear of the resin. Most standard epoxy resin systems will degrade when exposed to UV light, as shown in the image below.

For this application, the luminaires are installed both internally and externally and thus need to be UV resistant. In addition, the epoxy systems are much harder and often show the signs of wear much clearer, due to the ability to scratch/key the surface of the resin. For these reasons, we would recommend a polyurethane based resin, such as Electrolube’s UR5634, or for applications where light dispersion is necessary, UR5635.

In addition to these initial changes when a protection compound is applied, it is also imperative that the performance of the LED system is tested in accordance with the end use conditions. The clarity of the protection media may be affected by the surrounding environment; exposure to UV light is an example that we looked at previously. A clear resin can be tested to understand more about its colour spectrum and results can be used to compare the clarity of a resin before and after UV exposure, for example.

Performing when the heat is on

Although LEDs are considerably more efficient than traditional lighting forms, they do still produce some heat. This heat can have an adverse effect on the LED and therefore must be managed to ensure the true benefits of this technology are realised. Thermal management is therefore another area where specially formulated chemical products are utilised to enhance the performance and lifetime of LED systems. Colour temperature is not only affected by the protection media or surrounding environment, it can also be affected by the temperature at which the LED operates. For example, with white light an increase in operating temperature of the LED could lead to a ‘warmer’ colour of light being emitted. In addition, if a variance in die temperatures is present across LEDs in the same array, a range of colour temperatures may be emitted, thus affecting the quality and cosmetic appearance of the device.

Encapsulation resins can also be used to dissipate heat away from electronic devices whilst also protecting the unit from environmental attack. The encapsulation resin essentially becomes the heat sink and conducts thermal energy away from the device. Such products can be used to encapsulate the technology behind and attached to the LED device and can also assist with the reflection of light back from within the unit, depending on the colour chosen. Encapsulation resins that incorporate the use of thermally conductive fillers can vary depending on the chemistry type; epoxy, polyurethane and silicone chemistries are available. The choice between chemistries will depend on the environment, for example, if the assembly will be exposed to frequent and rapid changes in temperature, a flexible polyurethane or silicone material will offer better performance than a tough, rigid epoxy.

Whether choosing a protective material for the individual LEDs or the entire unit design it is clear that the operating environment must be considered. With applications becoming more and more diverse, the number of challenges is increasing. By the correct selection and application of protection compounds, it is also possible to use LED arrays in a wide range of products and when combined with efficient thermal management it is possible to achieve consistent quality and appearance whilst improving the lifetime of LED devices.  It is therefore clear that by the continued use of specially formulated electro-chemical compounds, the opportunities for further applications are increasing within this ever evolving industry. 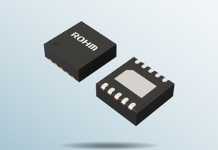 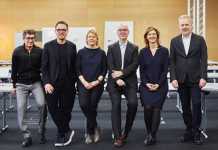