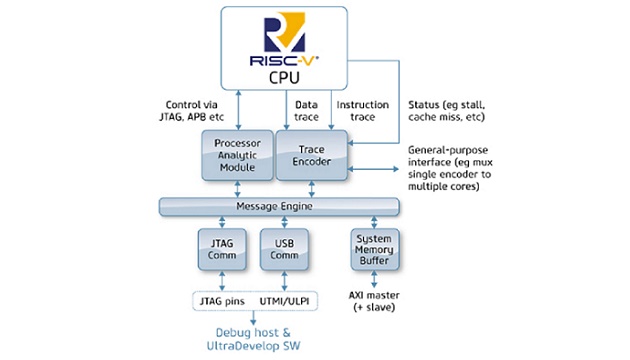 UltraSoC announced new technology within its embedded monitoring and analytics infrastructure that allows designers of high-performance computing, storage and real-time devices to squeeze ultimate levels of performance from their products. The addition of cycle-accurate trace enables developers of real-time applications using UltraSoC’s embedded analytics to see not only what is happening inside devices, but critically, when something occurred.

Cycle-accurate tracing is increasingly important in real-time and performance-critical applications, where engineers need to optimize the operation of their hardware and software code down to the level of single clock cycles – the smallest unit of time recognized by a CPU, GPU, DSP or accelerator. Cycle accurate tracing will initially be available as part of UltraSoC’s processor trace solution for RISC-V, the rapidly-growing open source processor initiative.

“Squeezing the last available drop of performance is increasingly important, both for our customers in the semiconductor industry, and their customers, who are creating end products like disk drives, automobiles and server platforms, using the SoCs we enable,” said Gajinder Panesar, CTO at UltraSoC. “In a world where ‘every cycle counts’, we’re helping to facilitate faster data access, better compute performance and optimal efficiency.”

The new cycle accurate trace capabilities build on UltraSoC’s leadership in RISC-V development and debug. In early 2018, the company announced the industry’s first and still the only commercial trace encoder IP designed for RISC-V, providing a mechanism to monitor the program execution of a CPU in real time. It encodes instruction execution and, optionally, data memory accesses, and outputs a highly compressed trace format. External software can later take this data and use it to reconstruct the program execution flow. UltraSoC’s RISC-V Trace Encoder is developed to be compliant with RISC-V standards, while offering a number of powerful features such as data and instruction tracing, a range of counters and timers and a fast profiling facility, clearly differentiating it from open source alternatives which implement the baseline RISC-V standard requirements.