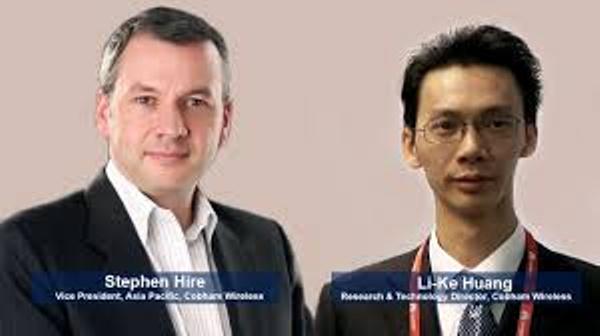 Cobham Wireless, global leaders in the provision of advanced wireless coverage and mobile communications systems, producing innovative, cost-effective solutions to address market requirements for improved connectivity, greater capacity and better quality of experience. Stephen Hire is Vice President, Asia Pacific for Cobham Wireless with responsibility for the Company’s sales, marketing, support and strategy for the APAC market. He has more than 20 years’ experience in the test and measurement industry and has lived and worked in India, Hong Kong, Singapore and UK in various sales and marketing positions.

Li-Ke Huang is the Research & Technology Director at Cobham Wireless, leading the Technology Group and the Algorithms Group, and is responsible for product concept and core technology innovations contributing to the company’s technological and business visions, directions and strategies. He specializes in leading multiple early technology research programs for the TM500 product family, which has been the de facto global standard for 2G, 3G, LTE, 4G, and 5G wireless network technology prototyping and testing, and acquired extensive knowledge on wireless technology R&D and business development cycles.

In an exclusive conversation with ELE Times Stephen and Li-Ke answered questions on emerging technologies in cellular IoT spectrum and wireless technologies such as LTE and Wi-Fi along with the evolving 5G concept of connectivity.

ELE Times: Given the explosive development of Cellular IoT, these days, mobile network operators are placing more and more importance on the exploration of vertical markets and IoT is an example of this trend. How can IoT solutions communicate safely and intelligently via the mobile network?

Cobham Wireless: The Cellular IoT solutions that are within the LTE technology framework automatically benefit from the LTE security and network management features, which ensure safe and efficient communication via the existing 4G networks. More research and standardisation efforts will be needed in developing the 5G IoT solution in order to meet the more demanding 5G IoT service requirements.

ELE Times: What are the advantages that NB-IoT offers over other low power, wide area alternatives?

Cobham Wireless: The NB-IoT physical layer is specifically designed to meet the low power and wide area design targets,using various techniques to improve the link budget robustness and device power consumption. Again, being an inherent part of the LTE technology framework, the NB-IoT solution has both commercial and technical advantages in deployments and maintenance, service creation, and mobility management, comparedwith non-cellular based alternatives.

ELE Times: When do you think the deployment of narrowband IoT connectivity (NB-IoT) would commence?

Cobham Wireless: Our business, market and customer intelligence indicates that NB-IoT mainstream R&D is currently in progress, targeting trial commercial deployment before the end of 2016.

ELE Times: Please brief about the main technology standards being developed by Cobham wireless for cellular IoT and 5G.

Cobham Wireless: Our 4G product roadmap covers all 4G IoT solutions (Cat-M, NB-IoT and eMTC) and has already delivered early test and validation solutions to the industry, enabling the IoT development on the eNB side. The Cobham Wireless 5G research programmehas researched and demonstrated the grant-free IoT technology for the low latency 5G requirement (which eliminates the dynamic request and grant signalling overhead), and we are actively working with our Tier 1 customers towards creating the high volume, high density and high complexity 5G IoT test scenarios, as these concepts are being proposed and discussed during the standardisation process (e.g. ETSI/3GPP).

ELE Times: What does the introduction of 5G mean for other technologies, such as LTE and WiFi?

Cobham Wireless: It is the common industry objective to achieve a single global 5G technological framework that is forward compatible and unifies various wireless technologies. It is both an opportunity and challenge to LTE and WiFi technology to evolve with this trend. For example, LTE could become a fall-back solution for 5G and could help 5G to carry control information, and future WiFi could help 5G to offload data traffic.

ELE Times: How is the TD-LTE industry progressing and what do you see for its future?

Cobham Wireless: TDD technology has come a long way over the past ten years. In the early days, TDD technology was synonymous with China and was considered by many to be simply a Chinese version of LTE. Spectrum scarcity for FDD has convinced many operators that there are benefits to using both TDD and FDD; the result is that today the picture is completely different with TDD and FDD deployments all over the world and most companies look at LTE as a whole with TDD and FDD as just another option in the overall LTE mix. To take one example, carrier aggregation now allows for combining FDD and TDD carriers together if that suits the spectrum allocations for an operator. Therefore, there is probably no longer a separate TD-LTE industry; instead we have an integrated LTE industry where the majority of players in the market develop integrated products that support both FDD and TDD. Using ourselves as an example, Cobham Wireless started working on TD-SCDMA (the precursor to TD-LTE) in 2001 and in the early days we had separate products and separate engineering projects but today treating them separately is no longer appropriate. Our industry standard TM500 network testers are used by virtually every single base station vendor for their R&D and as our customers have moved to developing integrated FDD/TDD products, we have also moved our marketing, positioning and development to be focused on LTE as a whole rather than dividing between FDD and TDD.

ELE Times: Are the technology standards for Cellular IoT in conjugation with the development of 5G.  If yes, please explain?

ELE Times: Please talk about the challenges in validating existing networks with the new technology that is being developed? How will 5G impact people’s user experience?

Cobham Wireless: IoT devices will bring significant changes to the nature and volume of traffic. Recent years have seen an explosion in the volume of data generated and consumed by individuals, and network expansion has focused on delivering more bandwidth and higher speed to each user. IoT will be different, and will instead massively increase the number of devices accessing the network. Consumer data usage puts pressure on delivering user data, while IoT will put pressure on the signalling side of the network. And if the signalling side gets overloaded, users will suffer as a consequence. To make sure that IoT can co-exist with conventional mobile devices, it will be important to balance both signalling and user data capacity. Validation tools such as Cobham Wireless’s E500 network capacity test systems allow vendors and operator to model traffic scenarios and work out how to optimise adding IoT traffic to the network. For example, an operator might wish to simulate adding smart energy meters to work out the best time of day for them to upload data to minimise impact on conventional users. Home automation devices could also be added to the models as well as different types of subscriber activity such as social media, video upload and streaming, VoIP services, etc. Getting the balance rightfor all of these services together with IoT will enable operators to extract more value and deliver a better quality of experience from scarce spectrum and radio access resources.

ELE Times: Please discuss the plans to test high volumes of IoT devices and the challenges that you see in this testing.

Cobham Wireless: This will pose a similar challenge to the transition to testing high volumes of feature phones and later smartphones. Traditional testing used signalling mode, but when the market exploded we were one of the pioneers in non-signalling test that enabled manufacturers to reduce test time by several orders of magnitude, and as a result to massively increase throughput. This helped to enable a huge reduction in manufacturing cost. We also pioneered multi-device testing of mobile devices and small cells which again helped to speed up test and reduce costs. IoT devices are likely to need a similar step-change. Just as the move from signalling to non-signalling helped manufacturers drive the factory gate price of feature phones from $100-200 per device to $20-30, another evolution will be needed as we move to mass production of devices that might cost less than $1. Non-signalling test and multi-device test will continue to be part of the solution, but manufacturers will also need to look at other ways to reduce test time,for example special test modes designed to optimise test time, minimising mechanical handling, off-air testing in shielded chambers, and minimising the number of test parameters.

ELE Times: What sort of compromises will need to be made to meet the cost and throughput requirements, and could this have a negative effect on interoperability?

Cobham Wireless: Operating the new cellular IoT services over the existing LTE network will present technical challenges; however according to most network vendors’ and operators’ roadmaps it appears that 4G cellular IoT deployments should be in the form of software upgrades to the existing NB. This software-only upgrade path should help limit any negative effects on interoperability while starting to generating new business and revenues from the IoT services. For 5G, the IoT service deployment will be combined with the concept of ‘network slicing’ enabled by the C-RAN and V-RAN architecture, which will enable the trade-off between cost, resources and demands to be made dynamically, and interoperability between services will automatically be managed by SON (self-organization network) and system orchestration technologies.

Self-Sufficiency in Chips Manufacturing is Critical for India

Helping Robots Collaborate to get the Job Done