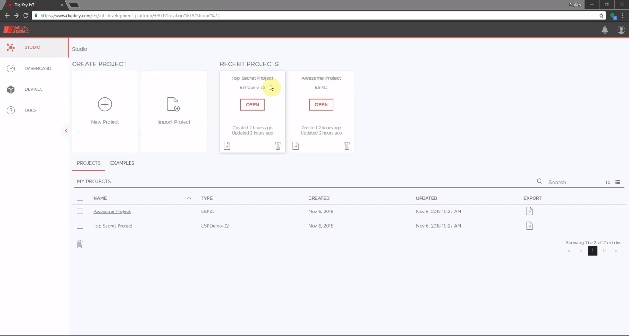 Digi-Key Electronics, a global electronic components distributor, introduces a new design tool called the DK IoT Studio. The DK IoT Studio is an integrated development environment (IDE) that aims to provide a radically simple way for developers and providers to create IoT solutions.  The DK IoT Studio allows you to go from idea to prototype in minutes without writing any code.

The new tool, developed in partnership with Atmosphere IoT, has an intuitive user interface along with drag-and-drop functionality. Simply dragging sensors, processors, and other library elements and dropping them onto the design panel allows a user to make connections and start collecting data and sending it to a mobile device or the cloud.  The DK IoT Studio also generates the embedded code (firmware) as well as the web and mobile application code.

“We are thrilled with this partnership and what it means for the Digi-Key community,” said Jeff Liebl, CEO of Atmosphere IoT Corp. “Together we are reducing the complexity involved in translating a smart, connected product concept into an actual working system.”

Other notable benefits of the tool include:

“The goal of providing a design tool like the DK IoT Studio is to offer a seamless path from the creation of an IoT solution to field deployment,” said Robbie Paul, Strategic Program Development Director – IoT. “We are ready to help bring your IoT designs to realization faster and easier than ever before, as the tool is uniquely paired with access to Digi-Key’s inventory of the world’s largest selection of electronic components to help you take your designs to the next level.”

For more information, check out the DK IoT Studio blog post and visit the IoT Studio page on the Digi-Key website.