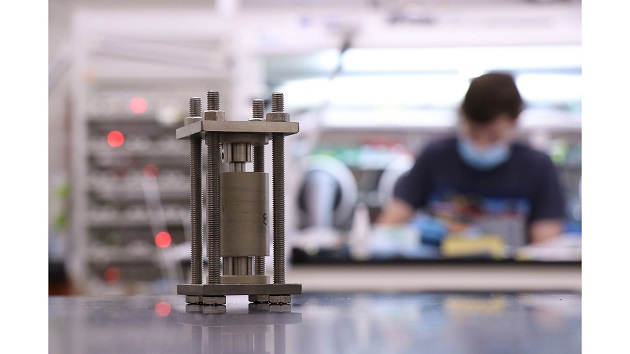 Despite the worldwide use of lithium batteries, the exact dynamics of their operation have remained elusive. X-rays have proven to be a powerful tool for peering inside of these batteries to see the changes that occur in real-time.

Using the ultrabright X-rays of the Advanced Photon Source (APS), a U.S. Department of Energy (DOE) Office of Science User Facility at the DOE’s Argonne National Laboratory, a research team recently observed the internal evolution of the materials inside solid-state lithium batteries as they were charged and discharged. This detailed 3-D information may help improve the reliability and performance of the batteries, which use solid materials to replace the flammable liquid electrolytes in existing lithium-ion batteries.

Using a small (roughly two millimeters wide) cylindrical battery, researchers at APS beamline 2-BM were able to capture 3-D images of structural changes during the battery charge and discharge cycles as they happened.

These clear images revealed how the dynamic changes of electrode materials at lithium/solid-electrolyte interfaces determine the behavior of solid-state batteries. The researchers found that battery operation caused tiny voids—resolved up to 1-2 microns in size, about 50 times smaller than the width of a human hair—to form at the interface, which created a loss of contact that was the primary cause of failure in the cells.

“This work provides fundamental understanding of what is happening inside the battery, and that information should be important for guiding engineering efforts that will push these batteries closer to commercial reality in the next several years,” said Matthew McDowell, an author on the paper and an assistant professor in the George W. Woodruff School of Mechanical Engineering and the School of Materials Science and Engineering at the Georgia Institute of Technology. “We were able to understand exactly how and where voids form at the interface and then relate that to battery performance.”

The lithium-ion batteries now in widespread use for everything from mobile electronics to electric vehicles rely on a liquid electrolyte to carry ions back and forth between electrodes within the battery during charge and discharge cycles. The liquid uniformly coats the electrodes, allowing free movement of the ions.

Battery packs for electric vehicles must withstand at least a thousand cycles during a projected 150,000-mile lifetime. While solid-state batteries with lithium metal electrodes can offer more energy for a given size battery, that advantage won’t overcome existing technology unless they can provide comparable lifetimes.

“We are very excited about the technological prospects for solid-state batteries,” McDowell said. “There is substantial commercial and scientific interest in this area, and information from this study should help advance this technology toward broad commercial applications.”