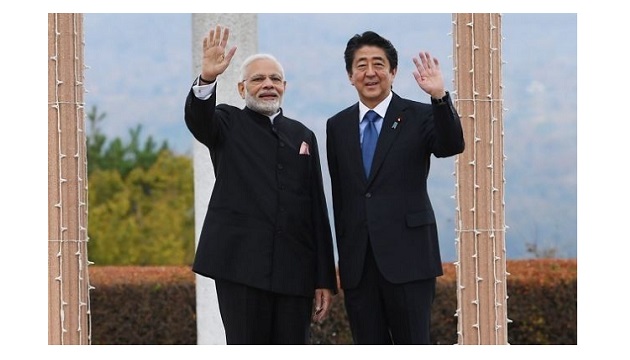 Indian Prime Minister Narendra Modi and Japan’s Prime Minister Shinzo Abe have agreed on enhanced cooperation in security and digital technology including working together on next generation technologies such as Robotics, Internet of Things (IoT), Artificial Intelligence (AI) and Unmanned Ground Vehicles (UGV).

A Memorandum of Cooperation (MoC) was inked between the Ministry of Electronics and Information Technology and Ministry of Economy, Trade and Industry on a Japan-India Digital Partnership.

Under this MoC, the countries aim to tap into the synergies and complementarities between Japan’s “Society 5.0” and India’s initiatives like Digital India, Smart City and Start-up India. It hopes to promote cooperation in areas of next-generation technologies such as AI and IoT.

Japan and India will promote the expansion of their startup talent in each other’s markets through a centre set up in India’s technological hub, Bangalore. The Indian government will support Japanese businesses entering the country by connecting them with talent and related companies.

The countries also signed a statement of intent between the National Institute of Transforming India (NITI Aayog), India’s policy think tank, and Japan’s Ministry of Economy and the Trade and Industry (METI). The statement is on AI and will encourage and develop cooperation on AI technologies.

To conduct joint research on AI, the Indian Institute of Technology Hyderabad and National Institute of Advanced Industrial Science and Technology, one of Japan’s largest public research institutions, will jointly develop AI technology and begin research in the robotics field.

Besides, the two nations have also made an arrangement for deeper cooperation between their defence mechanism and for same a joint project in the area of development of Unmanned Ground Vehicle (UGV) and Robotics has been initiated. This joint project will collaboratively done by India’s Defence Research and Development Organisation (DRDO) and Acquisition, Technology and Logistical Agency (ATLA) of Japan.

Share
Facebook
Twitter
Pinterest
WhatsApp
Previous article‘The Automotive Industry is a priority market for NI, and we are well-positioned to help the test departments keep pace with the changes’
Next articleCM to decide on BMTC’s 80 electric bus procurement