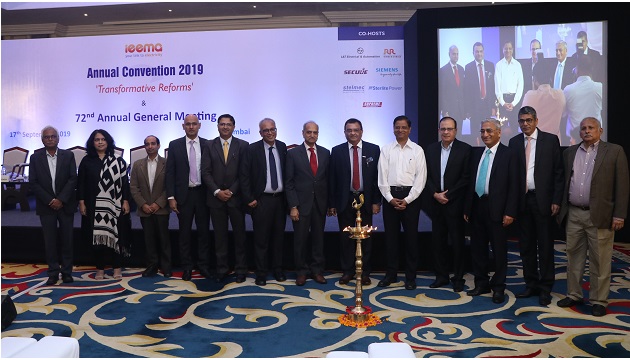 Access to reliable, affordable electricity is a key driver of economic growth in modern economies. The power sector, once a predictable and slow-moving industry, is now a complex system undergoing rapid transformation. Countries are in various stages of reforming and transforming their power sectors to better incorporate modern technologies, assure reliability and affordability, reduce harmful air emissions, meet a wide range of environmental goals, and achieve critical developmental objectives. Joining hands with the Government of India in this process, IEEMA themed its Annual Convention as ‘Transformative Reforms’.

The Convention was inaugurated by Subhash Chandra Garg, Secretary, Ministry of Power. The Convention witnessed the presence of around 270 delegates from the Electrical equipment Industry. The Convention was followed by IEEMA’s 72nd Annual General Meeting where RK Chugh took over as President IEEMA for the year 2019-20. The implementation of the various reform measures in India has given immense opportunities to the countries of the world to come and invest in India and promote bilateral trade, technology sharing and transfer and also joint membership.

Subhash Chandra Garg, Secretary, Ministry of Power stated, “There are transformational changes happening in the power sector but there is a need to bring in drastic reforms in the power distribution sector and the government is working on the revised version of the scheme, where it will also cater to separating carriage and content in the distribution sector. Electricity distribution is an area of concern. There have been various initiatives taken by the government, including the UDAY scheme to revive the distribution sector, but it has not proved to be effective. It is necessary that we take drastic reforms in the sector.

He further adds, “The aim of the UDAY scheme was to make sure that power is paid for. I am of the view that is discoms are buying power, they should pay. Under the UDAY scheme, states have to bear the burden of the losses of discoms. If this time the power sector digs deep holes in the finances of the state, then Centre will have to take the burden as the discoms will not be able to do it. He also noted that the private sector will play a key role in the transformation journey of the Indian power industry.

RK Chugh, President Elect, IEEMA, said, “India’s power system is the third largest power system in the world, and is complex and challenging.  It was exactly three years ago that our honourable Prime Minister said that if India wants to meet the challenge of change, it needs rapid transformation and not gradual or incremental change. It needs transformation in governance and mindset. He further added that transformation in mindset can only come from transformative ideas. Keeping this in mind, the theme for conference during AGM and annual convention is “Transformative Reforms”.

Sunil Misra, Director General, IEEMA articulated, “India has achieved its objective of making available electricity to all villages and households. The next challenge to be achieved is 24×7 Quality electricity to all. While this objective is being pursued there are a number of disruptions which are taking place in the environment such as; thrust on Renewable Energy, Distributed Networks, E Mobility, change in consumption patterns and many more. Viable business model in the Transmission and Distribution of Electricity is still a challenge and the present Government and its Leadership is seized of this issue and is working towards finding practical solutions.”

Transformative Reforms in the Power Sector