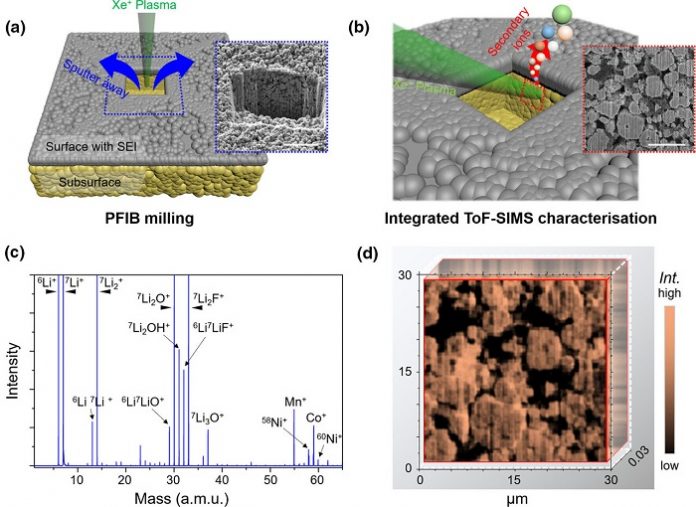 An international team of researchers has devised a method to detect the degradation mechanism of lithium-ion batteries. Lithium-ion (Li-ion) batteries are seen as the great hope for the future of battery technology because of their immense potential for long-life cycles and energy density. However, degradation is one of Li-ion batteries’ toughest challenges. To eliminate the degradation and extend the lifespan, scientists need to figure out what causes IT in the first place.

The University of Surrey, together with TESCAN Brno, s.r.o. (a leading global supplier of scanning electron microscopes and related charged-particle beam instruments) and the Oak Ridge National Laboratory explain a new way to detect and investigate Li-ion’s degradation mechanisms.

The team used an integrated characterisation platform to directly observe inside the batteries’ electrodes. This platform is based on a dual-beam electron microscope, with the mass spectrum equipment attached to it.

Dr. Yunlong Zhao, project co-lead from the University of Surrey, said: “If lithium-ion batteries are to meet their potential by playing an integral role in our day-to-day lives via a varied range of applications, the scientific community needs to identify and investigate the complex reactions during their degradation. Our method could be the building block that allows Li-ion batteries to improve energy density.”

Dr. Tan Sui, project co-lead from the University of Surrey, said: “Our team of talented scientists were driven by the prospect of developing a method that could someday allow Li-ion batteries to play a leading role in a greener planet. We are excited by what the future might bring.”