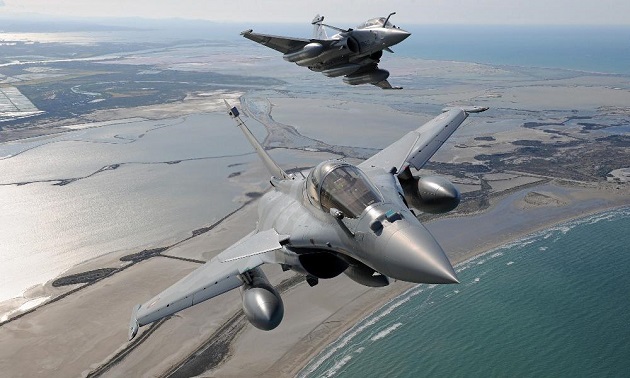 Indian Air Force Chief, Rakesh Bhadauria will flag off 6 Rafale fighters from the Merignac-Bordeaux airbase in France today.
The IAF chief visited France on April 20 and will be in the country until April 23 during which he will meet with his counterpart, Philippe Lavigne.
CAS will hold meetings and discussions with the senior military leadership of France and visit operational facilities and airbases. The visit comes after Gen Philippe Lavigne, Chief of Staff, French Air and Space Force (FASF) visited India in February 2020.
The two Air Forces have seen significant operational interaction in the recent past. IAF and FASF engage in the bilateral air exercise series ‘Garuda’, as well as hop exercises, the last being Ex Desert Knight 21 held at Air Force Station Jodhpur in January 2021. IAF and FASF also participated in the Ex Desert Flag hosted by UAE Air Force along with other friendly countries in March 2021.
In all the IAF has ordered 36 warplanes at a cost of Rs 59,000 crore. India had ordered the jets from France in September 2016 under a government to government deal.
The additional jets will bolster the capabilities of the Golden Arrows Squadron of the Indian Air Force.
This is crucial as it comes at a time when the tensions with China have been escalated along the Line of Actual Control at eastern Ladakh.
By April 2021, 16 Omni role Rafale jets will be inducted into the Golden Arrows Squadron. On September 10, five French-made multirole Rafale fighter jets were inducted into the Indian Air Force in a glittering ceremony at the Ambala air force base.
Nine more would arrive in April and this would take the total number of fighters handed over to the Indian Air Force to 23. While the Golden Arrows Squadron would be complete with 18 fighters, the remaining three would be sent to the Hashimara airbase in north Bengal’s Alipurduar. This would aid in countering the Chinese threat in the eastern front.