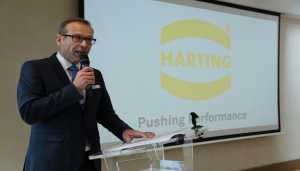 For more than three decades, HARTING was a German company through and through. This changed in 1979, when the technology group opened a sales office in Paris and thereby took the plunge into internationalisation. This 40-year anniversary was recently celebrated in the French capital.

It was a step that raised some concerns for him at the time, admitted Dietmar Harting in his official speech. However, the strategic decision quickly proved to be both right and necessary, with HARTING France ultimately becoming the “mother of all subsidiaries”. After the positive experience in France, HARTING replicated this success a year later in the UK; by the end of the decade, almost a dozen branches had been established across Europe, North America and Asia. In 1981, 30 percent of revenues were generated by the family-run company on foreign markets. This figure is now almost 70 percent.

A former sales representative who also sold HARTING products advised Marie Harting and her son Dietmar about the immediate potential that could be generated by setting up branches of the company and about the benefits of having representative offices abroad. “Our customers wanted to have HARTING products as well as direct contact with us,” recalls Dietmar Harting in Paris. Operating just from Eselkamp alone and using sales representatives who were also offering products from other companies would not help HARTING to become competitive for the long term.

In September 1979, the subsidiary was opened in Fontenay-sous-Bois, and the HARTING team moved to the industrial quarter of Roissy 10 years later. In the early 80s, Jean-Pierre Parrice took over management of the subsidiary and in 1984 he assumed responsibility for the establishment of production plants in Biel, Switzerland.

The DIN connectors and the Han portfolio were what won over the French market. Today, the Han 1A, the ix Industrial and the M12 PushPull are all in high demand.  HARTING France initially focussed on the telecommunications market, and then later on the railway market. Today, the railway sector generates the largest share of sales.

The French market is home to many small- and medium-sized companies that produce special machines or packing machines and thus have diverse requirements. Many of them rely on the tried and tested HARTING quality to meet these requirements. Furthermore, the local production plant and its five employees is one of the strengths of HARTING France. “Small series and prototypes of tailored cable sets with HARTING connectors can be quickly produced in accordance with customer requirements,” explains Nicolas Dusch, Managing Director of HARTING France. HARTING France currently has a workforce of 34 employees.