Extended Reality, Fading the Lines between Imagination and Reality 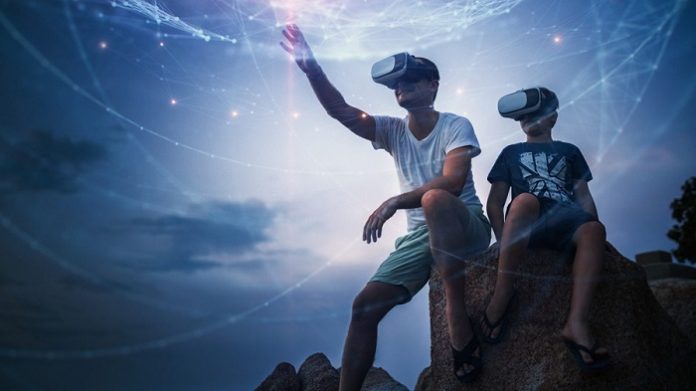 Jenny Walks in on a location. She has to set up a space for a product unveil for a group of clients. Enter: LISA, Location Integrated Systems Architecture (absolutely hypothetical). The world’s most effective and efficient untethered holographic computer.

The device maps the room in order to construct a digital map of the space, allowing Jenny to fill the room with holograms. The next-generation hand tracking will allow jenny to arrange all the things in the room in a perfect spot. She would move the holograms throughout the room in real-time and space. The staff will react using physics-based simulations just like they would in the real physical world.

Now Jenny needs to have her team on location for a successful product launch event. Alas! John, the head of marketing fell sick, so he joined Jenny with his 3D Avatar, which he scanned using his phone.

Imagine the web of the future where you can draw inspiration from the cloud in three dimensions and all around you just like, Tony did when he made a number of Iron Man Suits or other next-gen stuff. This may sound a bit sci-fi to some people but it sure as hell not.

Technology has made a quantum leap from its jump start and it is advancing at a much more rapid pace than yesterday. Decades ago, we would have only dreamt of the technology that we have in our hands today. One such very enticing piece of tech is immersive technology. Changing the definitions of reality with augmentation, virtual, mixed and even extended reality realms.

Watching Jurassic Park in a 6D theatre, where the audience can feel the dynamic skies and experience the chills of a Terex roar is one such example of extended reality. However, that is just the tip of the iceberg. Immersive technology is being widely adopted in numerous industries and has enormous industry applications.

But first, for the uninitiated, let us glide through the branches of this amazing technology to put things into perspective.

Virtual Reality uses VR glasses or headsets to create a simulator environment and helps an individual to immerse into it to experience an entirely different reality. However, the historical journey of virtual reality began back in the 1800s. This marvellous idea has been evolving from the time practical photography came into existence. Morton Heilig invented the first VR device called SENSORAMA invented in 1957. Today, a lot of tech giants are investing billions in the VR sector.

Virtual Reality transposes its users to a different setting through a simulated digital experience. It makes use of a head-mounted display (HMD) to create an immersive experience by simulating as many experiences as possible. Industries such as healthcare and real estate have started using virtual reality significantly.

As the word suggests, augmented reality takes the existing reality and overlays it with various types of information, enhancing the digital experience. It could be described as maker-base, maker-less, and location-based. It has proven useful in medical training, design, modelling and numerous other areas.

Being the most recent advancement among reality technologies, mixed reality is experienced through mixed reality glasses or headsets where the user can interact with physical and digital objects in real-time.

Mixed Reality is a blend of physical and digital worlds, unlocking the links between human, computer, and environment interaction. This new reality is based on advancements in computer vision, graphical processing power, display technology, and input systems. The application of Mixed Reality has gone beyond displays to include:

Most augmented reality and virtual reality offerings available today represent a small part of this spectrum and are considered subsets of the larger Mixed Reality spectrum.

The term “extended reality” (XR) refers to all environments that combine real and virtual elements with various levels of interactivity with and between these elements. This includes augmented reality (AR), which superposes virtual 2D or 3D elements onto a real environment, virtual reality (VR), which completely immerses the user in a virtual universe, and mixed reality (MR).

Sometimes considered as a type of AR, the latter merges the real world and virtual world to produce a new space in which physical and digital objects coexist and interact more extensively.

In addition to the above are 3D audio and human-machine interfaces (HMI) – that enable a user to control and communicate with a system –, including for example location sensors, motion sensors, and haptic devices.

XR is therefore a superset integrating the entire spectrum of the virtual-reality continuum, from the unaltered physical environment to completely immersive virtual reality.

Been There, Seen that

Movies like Inception and Avatar have been the harbinger of showcasing this fascinating immersive technology and hinting to the audiences about the great potential of this future technology.

Social media applications have also been using immersive technologies with full force and it’s been quite a long time since they are catering that tech to their users. You know the Snapchat and Instagram filters, Okay, not every AR app does something that is impressive, but yet, the technology behind this one is. For a teenager, it’s the screen-licking dog face instead of their own, or some special effects reacting to what they do with their face: blinking, raising their eyebrows, or opening their mouth.

Snapchat recognizes a face by comparing a statistical model to the image seen by a phone’s camera. The face map is predefined. It just needs to be adjusted to a real face. How do they do that? The algorithm looks for commonly contrasting parts of your face.

Although most Snapchat filters are for pure entertainment, the big brands have already seen the marketing potential.
This little piece of tech has been applied by the entertainment industry rigorously. Be it a release of a new movie or a series sometimes even a song they have a Snapchat filter for every nick and john. The average user spends about 24 seconds playing with the filter before sending the snap. That’s 24 seconds of the user being influenced by a brand while having fun!

So, it’s been pretty clear that we all have been privy to immersive technology in one way or the other. However, there has been a gigantic development and application happening of this technology all around the globe that can lead us to the future of technology much sooner than anybody has ever been able to imagine.

An immersion into different jobs

XR is used more and more by companies to offer innovative and safe training. This can be finding out about a profession, learning professional practices and safety instructions, skill development, etc.

The advantage of immersive technologies is that they can reproduce working environments and create a great number of scenarios, including ones that are risky or difficult to set up in reality, by offering a high degree of immersion and interactivity.

The learner evolves in an ultra-realistic site simulation, or grasps a complex system, and carries out the assigned exercises. The trainer can analyse the strategies deployed. Once in real conditions, the person who has been trained knows the professional practices better and applies them more easily.

For sometimes dangerous jobs (in energy or construction for example) or for those with major responsibilities (surgeon, airline pilot, etc.), XR training is a way of preparing students for delicate situations, such as critical on-site interventions, without the associated risks.

They also contribute to more efficient learning. In the area of education and training, the benefit of simulations has been highlighted for a long time. “Augmented” by XR, they enable learning that is less theoretical – outside the classroom –, more fun, and based on experience, which should motivate learners more and anchor knowledge more in the long term.

Design and production assistance in the factory of the future

Identified as strategic for industry 4.0, immersive technologies are involved at all stages of the production chain, from research and development to placing products on the market.

During conception, they help designers and engineers to elaborate and test industrial products. For example, prototyping in virtual reality provides the opportunity to visualise 3D-models of real objects designed with computer-aided design software, to simulate their operation in virtually real conditions, analyse the results, and optimise their design. And all this while leaving a lot of room for collaborative working.

Making it possible to limit prototypes and physical tests, the use of virtual prototypes at an early stage of the development cycle reduces design costs and delays, while also optimising product quality. In effect, they provide engineers with the opportunity to compare the performances of different models quicker and to define the best manufacturing processes.

Hospitals, for example, are using VR to help patients regain dexterity and motion. Extended Reality is improving Healthcare by streamlining medical procedures while enhancing patient care. Allowing surgeons to visualize the complexities of the organs in 3D, it is enabling them to plan each step of a complicated surgery in advance. Essentially, it is ensuring that surgeons can perform surgeries in a more safe, effective and precise way.

Extended Reality makes it easier for real estate agents and managers to close a deal by enabling prospective homebuyers to get a real feel of the property. The layout scenarios that are enabled by Extended Reality enhance customer experience while providing business opportunities.

The operation was completely based on the application of the Microsoft Hololens for use in real-time. The combined process helped achieve the first end-to-end remotely guided transcatheter aortic valve replacement, considered a major and critical one.