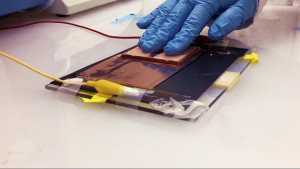 Scientists are always finding new ways of producing and harvesting energy. This will only increase as the demand for energy increases, which is going to happen with the current population and technology growth around the world. While most scientists are concerned with the creation of large amounts of energy and increasing the efficiency of existing devices so that more energy can be harvested from nature, there is a growing movement among the nanotechnology community in creating nanoscale devices that harvest small amounts of energy.

Many may ask what’s the point of such small energy harvesting devices, but they have significant potential for performing self-powering operations in small and remotely located devices, such as those used in health monitoring, environmental monitoring, wireless transmissions, sensor, and Internet of Things (IoT) network applications.

What Are NanoGenerators and How Do They Generate Electricity?

The short answer is that they are devices that convert either mechanical or thermal energy into electricity via a physical change within the nanogenerator. There are three main types of nanogenerators:

The internal structure and energy harvesting mechanisms vary from nanogenerator to nanogenerator. So, to understand how they work, we need to look at each one individually.

Piezoelectric nanogenerators convert kinetic energy into electrical energy using materials that can exhibit the piezoelectric effect, i.e., the generation of an electrical charge under mechanical stress and/or deformation. The structural configuration of these devices can be very diverse depending on the materials used. Many different types of materials can be used from solid-state materials that adopt a wurtzite or a blende lattice confirmation to perovskite materials and certain polymers. These materials are fabricated in nanowire forms and are then implemented vertically or laterally on top of a metal layer to create a Schottky contact. Some nanowires can also be embedded within a polymer matrix. Regardless of the structural construct, all the nanowires within the nanogenerators are connected to electrodes at either end.

Because there are many ways that the active piezoelectric components can be arranged, there is more than one working mechanism. However, a piezoelectric nanogenerator will usually rely on one of two common mechanisms:

There are multiple mechanisms by which these nanogenerators work. These include:

Overall, regardless of the specific mechanism, two nanosized films—which can be organic or inorganic in nature—that have opposite tribo-polarities induce a charge transfer mechanism that ultimately leads to the generation of an electric field, the migration of electrons between the nanomaterials, and an electric current.

A pyroelectric generator uses pyroelectric materials—those that generate an electrical current under a change in temperature—to convert external thermal energy such as heat into an electrical current. The types of materials that can be used in these nanogenerators are narrower than other nanogenerators, and they often use either ferroelectric materials or solid-state materials with a wurtzite crystal structure. These materials are again connected at either end by electrodes.

There are two different mechanisms by which pyroelectric nanogenerators self-generate electricity:

Overall, there are many different types of nanogenerators that rely on different materials and different operational mechanisms to generate electricity from physical movements or thermal energy. While the generated electricity in many of these devices is small, it is enough to power a small remote device that can be self-sufficient in terms of power. This has great potential for future devices that will be used for remote monitoring applications and those that are part of IoT networks.