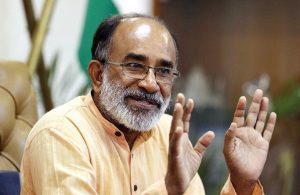 Minister of State for Tourism (Independent Charge) K.J. Alphons said the Digital India program, flagged off under the Narendra Modi government, has the potential to provide an incremental 20 to 30 percent increase in India’s GDP by 2025, owing to the significant progress made under the scheme since its inception in July, 2015.

Inaugurating ASSOCHAM’s 13th National Summit on e-Governance and Digital India, Alphons, who is also the Minister of State for the Ministry of Electronics and IT, stated that several of the flagship projects under the program have moved from the planning phase to the execution phase, and the progress made in these projects and across the three vision areas of Digital India has started to show an impact on the lives of citizens and on businesses.

Highlighting the importance of digital technology in India’s development, Alphons opined that it is bridging the gaps in financial and social inclusion with initiatives such as Direct Benefit Transfer (DBT). Digital is plugging the gaps in physical infrastructure to some extent with projects such as online courses. Thus, technology is an enabler for India to progress socially and economically, he said.

“Digital India is an umbrella program that covers multiple Government Ministries and Departments. It weaves together a large number of ideas and thoughts into a single, comprehensive vision so that each of them can be implemented as part of a larger goal,” he said.

Alphons further said the success and brand established by the Indian software services industry need to be leveraged with next wave of “Made in India” technology, products and innovations.

“Our government has laid unprecedented emphasis on innovation and technology and its cross-sector potential as also evident in the Manifesto 2014. The three flagship programs namely Digital India, Skill India, and Start-up India are all focused on it,” noted Alphons.

With the increase in internet penetration and availability of resources, many emerging technologies such as cloud computing, Internet of things (IoT), e-Commerce, mobile applications and so on have revolutionized the world of digitization.

With over 300 Million Broadband Subscribers in India and over 1186 million wireless telephone connections, India is fast moving up the ladder of digitization; be it smart grids and smart meters, smart water distribution system, intelligent traffic system, home automation, wearable devices in eHealth domain and digital identity.

“We are working on new policy, which will further spur electronics manufacturing. We are also coming out with cybersecurity product procurement policy, which will give preference to domestic industry. We are working to create Data Protection Act which will provide a huge impetus to digital economy. Rs. 12,500 crore worth opportunities are being opened for locker service providers. The Model RFQ being created for procurements of IT products,” said Dr Ajay Kumar, Additional Secretary, Department of Electronics and IT.

Union Budget: What Has Come to the Electronic & Tech Industry’s...