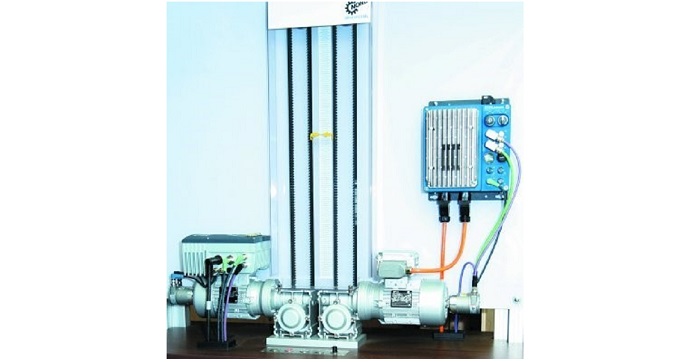 The flying saw function enables coupling and parallel movement of a processing unit onto a moving work piece. As the transport of material travels on the master axis, the slave axis is synchronised and processing is executed as soon as synchronised movement is attained. The slave axis then returns to its initial position and the process is repeated. This way, the processing of a work piece is possible during transportation. Application examples include the cutting of materials or foodstuffs and the transfer of liquids.

Due to the internal PLC and the POSICON position control within the NORDAC LINK and NORDAC FLEX frequency inverters several NORD drives can be synchronised in master / slave operation. The integrated POSICON functionality ensures that the inverters are able to determine the current position of the drive. As a result, functions such as synchronised movement and flying saw can be executed quickly and precisely. Up to three slave inverters can be controlled by one master inverter without requiring a higher level control. In addition, the inverters are freely configurable and easy to install and maintain due to their comprehensive plug-in capability.

Not only complex applications, but also simple ones can be controlled by means of the decentralised drive units by NORD. The networked drives are equipped with multiple interfaces and are ideal for Industry 4.0 applications. A PLC integrated into the inverters is able to reduce the higher level control and enables a modular automation concept. It is freely programmable and able to process data from connected sensors and actuators and, if necessary, it directly initiates a sequence control. The drives communicate their status data via the control system or into a secure cloud. This way, NORD drives can be used for continuous Condition Monitoring and Predictive Maintenance. NORD launched the Predictive Maintenance applications as pilot projects within the scope of the Industry 4.0 environment. You are welcome to contact us for more information.