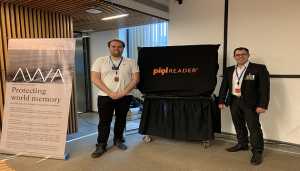 Mr. Helge Tryti, Commercial Counsellor from Innovation Norway welcomed attendants. ‘Many of you, from all corners of the market, have probably experienced some of Piql’s innovation already without knowing it so we look forward to showing you some new and exciting technology today,’ he said.

‘In recent weeks, Piql has appeared in headlines around the world with clients such as technology leader Github and UNICEF announcing their collaboration and their support of this unique archival technology,’ he said.

Piql’s innovative approach to archiving repurposes photosensitive film to be a digital medium. Data is stored using high density QR codes with all information needed to recover the information also stored on the film, making it self-contained and future-proof.

This tried and tested technology can keep data alive for hundreds of years, without the need for migration. The data is secure, unalterable and can be recovered without the risk of data loss, no matter how long it is stored for. It is the only service of its kind and the only offline, migration-free technology available for long term digital preservation.

Piql also offers storage in the Arctic World Archive, an offline vault deep in an Arctic mountain holding precious world memory. The archive ensures the protection of the most sensitive and irreplaceable data for future generations. Growing all the time, the Archive holds treasures including The Scream by Edvard Munch, ancient manuscripts from the Vatican Library, archives from various nations and the most significant open source code repositories from Github.

Speaking at the event, Managing Director of Piql globally, Rune Bjerkestrand said that India was an exciting market for Piql.

‘India is a nation with a rich history and cultural heritage that should be cared for and protected for the benefit of future generations. Additionally, with large collections of paper and analogue archives, there is great opportunity for digital transformation and creating greater access to that information—something Piql can also help with,’ he said.

Also speaking at the event, Ms. Tania Friederichs, Counsellor, Head of Research & Innovation Sector, Delegation of the European Union to India said that EU has provided strong support for the technology.

‘Piql is supported by the European Union’s Horizon 2020 “SME Instrument Program” as well as the “Fast Track to Innovation Program”. Thanks to the strong support from both programs, the technology has become cutting edge and shows the EU believes that Piql’s technology can make a difference in this world,’ she said

Guests in attendance received a demonstration of the brand new piqlReader, already having won a design award for sleek design and functionality, and hands-on look at the piqlFilm.

Piql’s full suite of services are available through Piql India, adding to global presence of the company, in 26 nations.

‘I look forward to supporting Piql India with their new clients and welcoming more deposits from India into the Arctic World Archive,’ said Mr Bjerkestrand.

Apple gets patent for foldable display; will the clamshell iPhone debut...