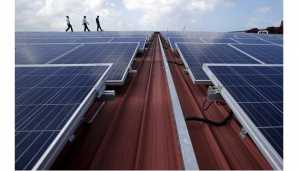 Chinese solar energy solutions provider Trina Solar has launched solar energy kits under the brand Trinahome to cater to the renewable energy needs of household and small and medium enterprises (SME) sector in India. Trinahome will come in three sizes, 3 kilowatts (KW), 5 KW and 10 KW, and will contain all components such as the solar modules, inverter, grid box, mounting system and other accessories as part of the all-in-one product pack.

With just 1.3 giga watt (GW) installed capacity so far, rooftop or home solar energy solutions is still in its infancy in India.

The company is yet to reveal its pricing strategy, but said it will be competitive enough. On an average, solar panels can cost approximately Rs 50 per watt. The total cost of installation of a 3 KW unit by local players could be anywhere between Rs 150,000 to Rs 300,000.

Trina will be the first organised player in this segment, otherwise known for individual installations by local enterprises. While India has seen solar power generation of about 22GW in the power utility segment, it is early days for residential and commercial solutions. Indian government has set a goal of 100GW of solar energy capacity by 2022 of which 60GW is to come from solar energy utility projects and 40GW from rooftop solar energy. While India has made good progress in adding the utility capacity, it is lagging behind in achieving the rooftop target,” says Gaurav Mathur, India director, Trina Solar.

The world’s second largest player in the solar energy space, Trina has supplied solar panels and equipment sufficient enough to generate 3.5GW renewable energy in India. “With 15 percent market share (in India’s installed solar energy capacity of 23.1 GW), we are clear market leaders in India,” Yin Rong Fang, President of Global Sales, Trina Solar says. “Now that we have solidified our strong position in the utility segment of the market, we are moving into the household and SME sector with the launch of Trinahome,” he adds.

The company has already signed up with local partners throughout the country to enhance its distribution and sales network. “We recognize that business to business (utility segment) is very different from business to consumer (home and commercial installations). We have been working behind the scenes to develop a nationwide customer service network. We have trained over 300 solar installers and issued 350 certificates in seven cities,” Mathur said.

While the solar kit will almost entirely be imported in the initial months, company plans to outsource some of the accessories and components excluding the solar panels from India in future.

30 gigawatts of renewable plants to be built along western border...