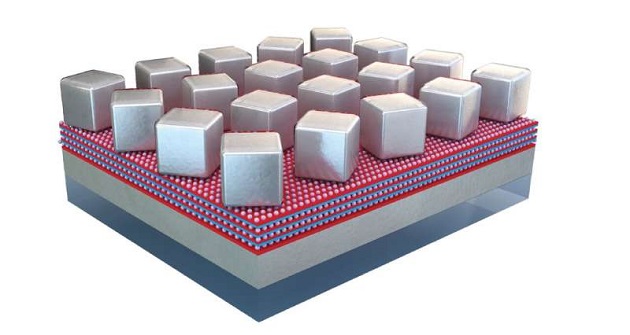 Visible and Infrared Light can carry more data than radio waves but has always been confined to a hard-wired, fiber-optic cable. Working with Facebook’s Connectivity Lab, a Duke research team has now made a major advance toward the dream of ditching the fiber in fiber optics.

In 2016, researchers from Internet.org’s Connectivity Lab—a subsidiary of Facebook—outlined a new type of light detector that could potentially be used for free-space-optical communication. Traditionally, hard-wired optical fiber connections can be much faster than radio wave wireless connections. This is because visible and near-infrared light frequencies can carry much more information than radio waves (WiFi, Bluetooth, etc).

But using these higher frequencies in wireless devices is difficult. Current setups use either LEDs or lasers aimed at detectors that can reorient themselves to optimize the connection. It would be much more efficient, however, if a detector could capture light from different directions all at once. The catch is that increasing the size of an optical receiver also makes it slower.

This was also the case for the Connectivity Lab’s design. A spherical bundle of fluorescent fibers captured blue laser light from any direction and re-emitted green light that could be funneled onto a small receiver. While the prototype was able to achieve rates of two gigabits per second, most fiber optic internet providers offer up to 10 Gb, and higher-end systems can push into the thousands.

Looking for a way to speed up their free-space optical communication designs, the Connectivity Lab turned to Maiken Mikkelsen, the James N. and Elizabeth H. Barton Associate Professor of Electrical and Computer Engineering and Physics at Duke. Over the past decade, Mikkelsen has been a leading researcher in the field of plasmonics, which traps light on the surface of tiny nanocubes to increase a device’s speed and efficiency at transmitting and absorbing light by more than a thousand times.

“The Connectivity Lab’s prototype was constrained by the emissions lifetime of the fluorescent dye they were using, causing it to be inefficient and slow,” said Mikkelsen. “They wanted to increase the efficiency and came across my work showing ultrafast response times in fluorescent systems. My research had only proven that these efficiency rates were possible on single, nanoscale systems, so we didn’t know if it could scale up to a centimeter-scale detector.”
The overall effect of the demonstration is the ability to capture light from a large field of view and funnel it into a narrow cone without losing any speed. To move forward with this technology, researchers would need to piece several plasmonic devices together to cover a 360-degree field of view and once again include a separate interior detector. While there is work to be done, the researchers see a viable path forward.
Share
Facebook
Twitter
Pinterest
WhatsApp
Previous articleNew Investments in the Indian Solar Energy Sector
Next articleExpansion in Worldwide Automotive Power Electronics Market