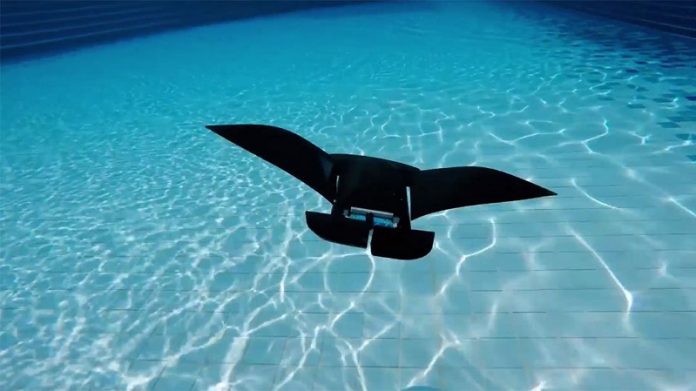 A team of researchers affiliated with multiple institutions has developed a soft robot that can successfully swim in the Mariana Trench. One of the problems with deep-sea submersible craft, whether manned or operated remotely, is dealing with the immense pressure involved. Hulls have to be designed and constructed that are capable of withstanding the crushing pressure found in the deepest parts of the sea—a very expensive way to go. In this new effort, the researchers have taken a new approach to the problem: emulating soft fish.

Prior research has shown that it is possible to make soft robots out of pliable materials such as silicone and other polymers. Soft robots have been constructed from such materials to emulate squid and other soft-body sea creatures. In this new effort, the researchers built their robot using soft polymers in the shape of a flying-type fish—one that swims by flapping its “wings” like a ray. The wings flap via a well-known assembly of fabricated muscle in a silicone body. An applied electrical current forces the muscle to contract, pulling the wing up. Relaxing the current allowed the wing to relax to its natural state.

The soft robot was grasped by a robotic arm on ‘HAIMA’ ROV and reached the bottom of the South China Sea (depth of 3,224 m). After the release, the soft robot was actuated with an on-board AC voltage of 8 kV at 1 Hz and demonstrated free-swimming locomotion with its flapping fins. The front view and side view of the swimming process were recorded by the cameras and LED lights on the ROV.

The researchers had to overcome a problem others had experienced in the past: adding electronics to control the robot. They found that simulating the architecture of snailfish bones worked very well—instead of trying to pack the electronics into as small of a packet as possible, they spaced them out and embedded them in silicone. This resulted in greatly reduced stress on the components.

The researchers tested their robot first in the laboratory, then at a nearby lake, and following that, in the South China Sea. Finding success at all of the depth levels they tested, the team then hooked the robot up to a traditional submersible and sent it down into the depths of the Marina Trench and found it worked just as well down there.