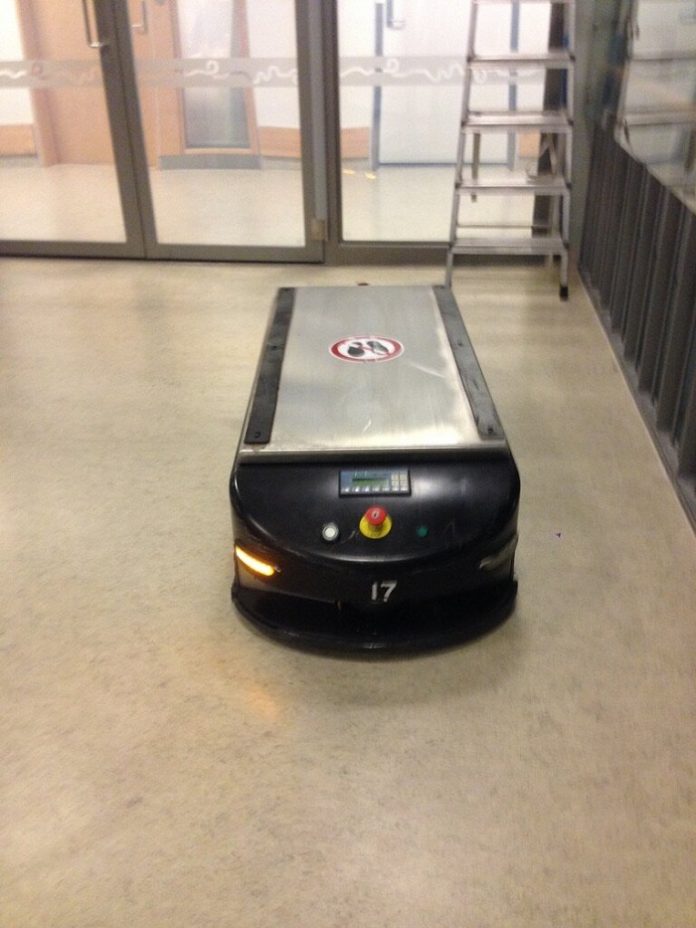 Robots are becoming more and more omnipresent in our lives, even though we may not notice. New research shows that people find it funny and engaging when a boxy motorized hospital robot can talk. And that may help people be more willing to accept new technologies, like robots, in their everyday lives.

No one expected the “Automated Guided Vehicles” at St. Olavs Hospital to have personalities. These motorized units, like long boxes on wheels, are merely meant to transport garbage, medical equipment, or food from one part of the hospital to another. But because they have to interact with humans, by warning them to get out of the way, they have to talk.

And that’s when the fun began.

Instead of using a generic Norwegian voice, they decided to give the hospital robots a voice that used the strong, distinctive local dialect. Suddenly these stainless-steel boxes, rolling around the hospital to transport goods, had a personality.

They were kind of pushy. A little rude, really. But fun.

Children with long-term illnesses who were attending school in the hospital during their treatments were given the assignment to find and identify them. One parent with a gravely ill child found solace in the robots’ endless, somewhat mindless battles as they unsuccessfully ordered inanimate objects—like walls—to get out of the way.

In a new study, NTNU researchers examine just how the robots came to be seen as friendly, animal-like creatures—and why that matters.

“We found that these robots, which were not created to be social robots, were actually given social qualities by the humans relating to them,” said Roger A. Søraa, a researcher at NTNU’s Department of Interdisciplinary Studies of Culture and Department of Neuromedicine and Movement Science, and first author of the new study. “We tend to anthropomorphize technologies like robots—giving them humanlike personalities—so we can put them into a context that we’re more comfortable with.”

Health care, especially in hospitals, involves lots of specialized skills and expertise. Whether it’s nurses administering to patients around the clock, or doctors providing critical surgery, or other highly specialized care, there’s plenty of work for people to do in a hospital setting.

So why not leave some of the more mundane work—say, moving food from the cafeteria to different hospital units, or bringing clean linens to nursing stations—to an automated industrial robot?

“These are types of jobs that can often be dull, dirty or dangerous, or what we call 3D jobs,” Søraa said. “These are jobs that humans don’t necessarily want to do or like to do. And those are the jobs we are seeing becoming robotized or digitalized the fastest.”

Since then, the robots have been driving around the hospital’s halls, following pre-defined routes among different pick-up and delivery points, using lasers to navigate. They also have sensors that enable them to avoid people, obstacles, and dangerous situations. They even take elevators—much to the annoyance of hospital staff—but more about this later.

And because they share the same areas as humans, they can say a few sentences when needed.

That, it turns out, is one of the key things that helps transform a metallic industrial box on wheels into a friendly animal-like creature with a personality.

Never planned to study the robots

Marianne Fostervold, then at NTNU’s Department of Architecture and Planning, and her colleagues didn’t actually set out to study the hospital’s robots. Instead, they were interested in how people adjusted to, used, got around, and were affected by the hospital’s architecture, which has been changed and modernized over the last decade.

The study was done in the hospital’s Women and Children’s Centre, which includes birthing facilities and a children’s cancer department, making it a place where people often experience strong, sometimes life-altering feelings and experiences.

The researchers followed health care staff, patients, and visitors on their routes in the hospital, and asked them questions about why they moved the way that they did, where they were headed, and how they felt at the time. The interviews were “open”, meaning that they were able to explore the questions asked, based on the responses of the interviewees.

Much to the researchers’ surprise, the AGVs kept turning up as a part of the conversation.

“There are quite a lot of different stakeholders relating to these robots—patients, caregivers, nurses, doctors, cleaners. There’s a whole bunch of people that have to navigate a world now where robots also are living and working,” Fostervold said.

One stuck robot and a distraught father’s smile

So what did these people think?

One distraught father who walked the hospital hallways after hearing of his child’s terminal cancer diagnosis told researchers about when he encountered an AGV that was stuck between some trolleys.

The robot kept moving back and forth, fruitlessly repeating its self-important message in the local dialect: “I am a hospital robot! You need to move!”

This slapstick ballet, of an inanimate object stubbornly trying to persuade equally inanimate objects to get out of its way, made the father smile. He told the researchers it was a bright moment in an otherwise dark time.

“These service robots were not created to be social robots,” Søraa said since they are just moving things around. “And yet people still tend to socialize with them and find social qualities in them.”

That matters, Søraa said, because it helps people accept the robots, and through that acceptance, other technologies that are coming our way are not seen as too alien. With robots like these, the goal is to make life easier and improve quality of care, because they can do things like free up resources at the hospital that would otherwise be required to do the jobs the AGVs do now.

“I see robots as emissaries of technologies. They give us a very good insight into how to understand quite cutting-edge technology in our societies,” he said. “And we are now living in a society that is more and more getting used to the fact that robots are now doing more work, like cleaning and transporting goods.”

Can be annoying, too

One of the key things the AGVs have to do is move goods from one floor to another. Naturally, they have to ride hospital elevators to do their job—much to the annoyance of some of the nursing staff, who have to compete with the robots to use the elevators.

The robots were initially made to override all other users and commandeer an elevator so they can get their work done.

One nurse told the researchers of problems she had with the AGVs preventing her from using the elevators when she was trying to transport patients in recovery.

“I was told by a robot that I had to leave the elevator because the robot was using it. It overrides the elevator, and I was let out into the basement of the hospital with a patient from recovery and had to get out of there. So, we stood there, and had to wait until the robot had finished,” she said.

Søraa says this is an example that robot designers should think about as they work to make machines that can more easily integrate into existing social situations. Taking over an elevator doesn’t seem like that big a problem, but the AGVs should not be able to take over elevators when sick patients need them.

The interaction between the AGVs and the elevators also helps anthropomorphize the AGVs, Søraa said.

The elevators also “speak”, as a way to help people who are visually impaired. They announce when the doors are opening and closing, and also state which floor the elevator is on. When an AGV is in the elevator, the elevator politely asks humans to “please use another elevator, this one is reserved.”

But the elevator voices are female and speak a very polite, standard dialect. The contrast between the polite elevators and the burly, rude AGVs and their local dialect is part of what makes the AGVs funny, and more easily accepted, Søraa said.

“When telling people to move out of the way, the robot will shout “Pass dæ, robottralle på vei. Æ skifte retning!” which translates as “Move away, robot trolley coming through. I’m changing direction!”

“We found that the use of the local dialect really gave the robots more of a personality,” he said. “And people often like to give non-living things human qualities to fit them within existing social frameworks.”