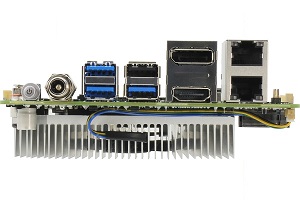 Improving upon the 11th Generation Intel Core Processor SoC of its predecessor, the UP Xtreme i11, AAEON’s next-generation UP Xtreme i12 utilizes the 12-core, 16-thread hybrid architecture of 12th Generation Intel Core Processors, making it more energy-efficient despite possessing double the previous generation’s thread count. With these improvements, the UP Xtreme i12 offers up to 20% greater CPU performance, while also hosting 32GB onboard LPDDR5 system memory, which provides double the bandwidth and memory capacity of the previous generation.

The UP Xtreme i12’s configuration of HDMI 2.0b, eDP 1.4, and two DP 1.4 slots give it the necessary tools to host four simultaneous 4K displays, alongside USB 4.0 and 2.5GbE ports ensuring high-speed connectivity to peripheral cameras. Compounding this powerful, efficient function is the 2.47 x increase in graphics speed provided by Intel Iris Xe graphics, which makes the board an excellent candidate for smart retail deployments.

Highly expandable, the board supports Wi-Fi 6 and 5G via M.2 2230 E and 3052 B-Keys, alongside a further two M.2 2280 M-Keys for PCIe 4.0 storage and AI module support. AAEON feel that this accommodation of multiple expansion modules will lead to the UP Xtreme i12 being the standard-bearer for IoT and robotics applications. This is supported by the ancillary technologies the board has access to through its CPU, such as Intel DL Boost and the Intel distribution of OpenVINO toolkit, which yields up to 2.81 x the GPU image classification inferencing performance of the previous generation.

While the UP Xtreme i12’s specifications align perfectly with the needs of smart retail and IoT applications, its utility also extends to industrial use, with a wide 12~36V power input range enabling its deployment in more rugged environments such as smart manufacturing.

The UP Xtreme i12 is now available for purchase, with pricing depending on SKU, and will soon be followed up by the UP Xtreme i12 Edge, an embedded, fanless edge system for customers that prefer a more plug-and-play solution.