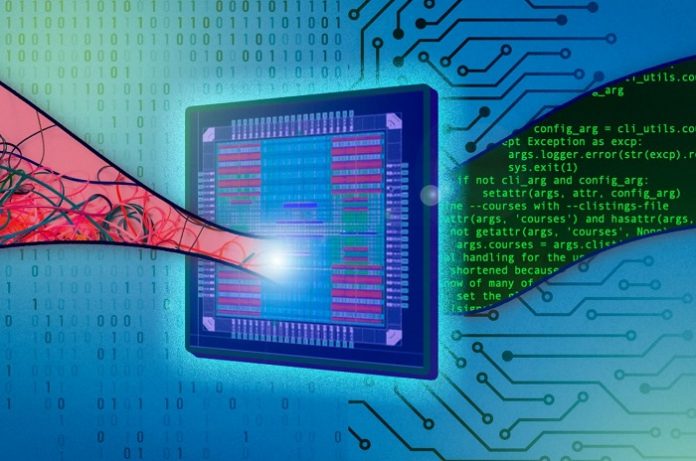 Every piece of data that travels over the internet—from paragraphs in an email to 3D graphics in a virtual reality environment—can be altered by the noise it encounters along the way, such as electromagnetic interference from a microwave or Bluetooth device. The data are coded so that when they arrive at their destination, a decoding algorithm can undo the negative effects of that noise and retrieve the original data.

Since the 1950s, most error-correcting codes and decoding algorithms have been designed together. Each code had a structure that corresponded with a particular, highly complex decoding algorithm, which often required the use of dedicated hardware.

Researchers at MIT, Boston University, and Maynooth University in Ireland have now created the first silicon chip that is able to decode any code, regardless of its structure, with maximum accuracy, using a universal decoding algorithm called Guessing Random Additive Noise Decoding (GRAND). By eliminating the need for multiple, computationally complex decoders, GRAND enables increased efficiency that could have applications in augmented and virtual reality, gaming, 5G networks, and connected devices that rely on processing a high volume of data with minimal delay.

One way to think of these codes is as redundant hashes (in this case, a series of 1s and 0s) added to the end of the original data. The rules for the creation of that hash are stored in a specific codebook.

As the encoded data travel over a network, they are affected by noise, or energy that disrupts the signal, which is often generated by other electronic devices. When that coded data and the noise that affected them arrive at their destination, the decoding algorithm consults its codebook and uses the structure of the hash to guess what the stored information is.

Instead, GRAND works by guessing the noise that affected the message, and uses the noise pattern to deduce the original information. GRAND generates a series of noise sequences in the order they are likely to occur, subtracts them from the received data, and checks to see if the resulting codeword is in a codebook.

While the noise appears random in nature, it has a probabilistic structure that allows the algorithm to guess what it might be.

“In a way, it is similar to troubleshooting. If someone brings their car into the shop, the mechanic doesn’t start by mapping the entire car to blueprints. Instead, they start by asking, ‘What is the most likely thing to go wrong?’ Maybe it just needs gas. If that doesn’t work, what’s next? Maybe the battery is dead?” Médard says.

The GRAND chip uses a three-tiered structure, starting with the simplest possible solutions in the first stage and working up to longer and more complex noise patterns in the two subsequent stages. Each stage operates independently, which increases the throughput of the system and saves power.

The device is also designed to switch seamlessly between two codebooks. It contains two static random-access memory chips, one that can crack codewords, while the other loads a new codebook and then switches to decoding without any downtime.

The researchers tested the GRAND chip and found it could effectively decode any moderate redundancy code up to 128 bits in length, with only about a microsecond of latency.

Médard and her collaborators had previously demonstrated the success of the algorithm, but this new work showcases the effectiveness and efficiency of GRAND in hardware for the first time.

Developing hardware for the novel decoding algorithm required the researchers to first toss aside their preconceived notions, Médard says.

“We couldn’t go out and reuse things that had already been done. This was like a complete whiteboard. We had to really think about every single component from scratch. It was a journey of reconsideration. And I think when we do our next chip, there will be things with this first chip that we’ll realize we did out of habit or assumption that we can do better,” she says.

A chip for the future

Since GRAND only uses codebooks for verification, the chip not only works with legacy codes but could also be used with codes that haven’t even been introduced yet.

In the lead-up to 5G implementation, regulators and communications companies struggled to find consensus as to which codes should be used in the new network. Regulators ultimately chose to use two types of traditional codes for 5G infrastructure in different situations. Using GRAND could eliminate the need for that rigid standardization in the future, Médard says.

The GRAND chip could even open the field of coding to a wave of innovation.

Moving forward, Médard and her collaborators plan to tackle the problem of soft detection with a retooled version of the GRAND chip. In soft detection, the received data are less precise.

They also plan to test the ability of GRAND to crack longer, more complex codes and adjust the structure of the silicon chip to improve its energy efficiency.