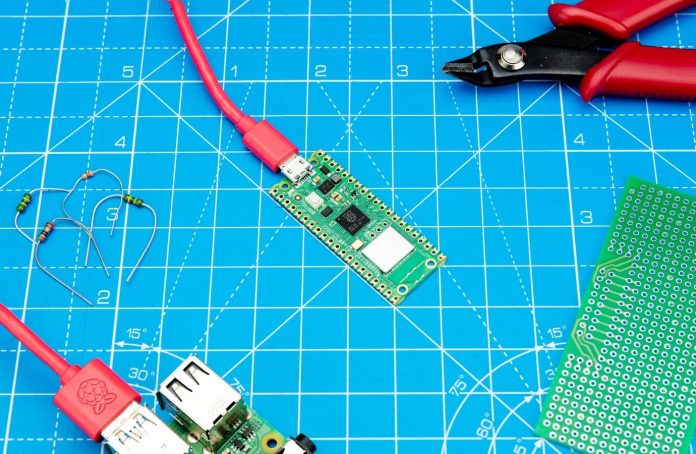 Often the simplest ideas drive the most profound technological transformations. We started Raspberry Pi more than a decade ago, with the goal of putting high-performance, low-cost computing capabilities into the hands of young people around the world.

Ten years later that philosophy still underpins our mission, but a funny thing happened to us along the way: our platform has not only become vastly more powerful, but it has found a home in applications far outside our original target market of enthusiasts and hobbyists.

Today, over 70% of Raspberry Pi units sell into industrial and commercial applications, and one of our fastest-growing markets is the Internet of things (IoT). To capitalize on this growth, and to help foster IoT innovation, in June we released the $6 Raspberry  Pi Pico W, a microcontroller board aimed at both hobbyists and professional design engineers.

Raspberry Pi Pico has been successful because it has a differentiated price/performance point, high integer performance, large memory, and a flexible, deterministic I/O subsystem. Professional engineers looking to squeeze maximum performance out of the device benefit from a comprehensive C SDK, while hobbyist users can rely on detailed tutorials, and a polished MicroPython port, developed with the help of MicroPython’s creator, Damien George.

Why did we choose to develop a Wi-Fi-enabled version of Raspberry Pi Pico?

Quite simply, because we believe Raspberry Pi RP2040 is the perfect platform for many IoT applications, and because an IoT product obviously requires network connectivity. Wi-Fi was a natural first choice, but we may explore other connectivity options in the future.

Why Arm, and why Cortex-M0+ processor?

We chose Arm because of the enormous amount of investment in the architecture. It’s the de facto 32-bit RISC architecture for embedded systems.

We are big fans of Cortex-M0+ because it’s Arm’s most area- and energy-efficient core. And it offers spectacular performance, particularly if you clock it hard. Our 133MHz M0+ handily beats larger cores implemented at lower clock speeds, particularly for integer workloads.

I don’t get much time to mess about with our technology these days, but I’ve very much enjoyed the simplicity of MicroPython on Raspberry Pi Pico W: open a serial console, start typing Python to scan for access points, join a wireless network, and start fetching webpages.

It’s so easy to build IoT applications, and we’ve already seen many great examples from the community. Sandeep Mistry, Arm Principal Software Engineer and Developer Evangelist, teamed the Pico W with a Pimoroni Grow Kit and Twilio messaging software to give his desk plant a personality.

The price is right

All of these capabilities open new market opportunities for us, but technical capabilities are only half of the story. At $6, Raspberry Pi Pico W is roughly half the cost of our next-cheapest wireless product, Raspberry Pi Zero W. Professional users are free to build their own RP2040-based products, with chips selling for as little as $0.70 in modest volume.

There’s an image that sticks in my mind from the early days of Raspberry Pi. We set up our little booth, with one of the earliest Raspberry Pi prototypes, at Maker Faire in New York in 2011. And at the next table was a young boy, who had automated a doll house using Arduino. You could just sense from that how very much young people wanted access to simple, low-cost computing with an interface to the physical world.

Over the succeeding 10 years, Raspberry Pi has made great strides catering to that demand, and our users have been able to create things with our platform that I never would have imagined in 2011. Some of those young hobbyist adopters are now professional developers. Others who were already professional have brought Raspberry Pi from their home into their work lives, driving the rapid adoption of the platform in the professional engineering community.

Our guiding principles have been price, performance, quality, and availability. By staying true to these principles, we’ve made it possible for people who wouldn’t have considered themselves to be embedded engineers to participate in the embedded space.

We believe that, with the right platform and the right tools, connected embedded development should not be difficult. And with Raspberry Pi Pico W, we’re providing our professional users with a solid foundation on which to build their own differentiated solutions.