MENUMENU
Home Technology 5G vs LoRA: How Narrowband Technologies are the Right Alternative to 5G 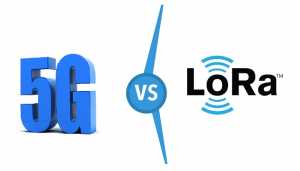 Today’s latencies on existing networks are far too long to support IoT applications such as connected cars or smart factory processes. A nationwide 5G network will change this in the future.

By 2020, an infinite number of IoT devices will be networked with each other. Forecasts range from 20 to 40 billion connected devices. As a result, physical (telecommunication) networks that are in operation today are reaching their limits. They are overwhelmed by the drastically increasing number of smart devices – in the future each radio cell will have to supply 50,000 devices.

However, ever since the thought of the next communication revolution started to gain traction, there have been significant concerns over its practical implementation. Telco experts believe that widespread adoption of 5G is still a few years ago, and more importantly, the bridge between LTE and 5G is already in existence- LoRA (Long Range). LoRA is among a few narrowband communication technologies that, like 5G, has the potential to connect devices without needing a licence to do so and over vast distances.

But, advocates of LoRA believe that there is much more to the technology than meets the eye. According to Mike Cruse, CEO of Definium Technologies, a firm that is innovating LoRA based devices for miners, farmers, and universities says, “It turns out you don’t need that huge infrastructure (of 5G) and it can be driven by small devices that are very smart and not very expensive.”

In fact, if you look closely, there might be a lot of truth to what Cruse said. From the time when IoT became a thing that the entire world was talking about, to today, the pattern suggests that enthusiasm over a truly connected world seems to have slowed down. The biggest factor to that being LTE’s inefficiency and latency in carrying data from connected devices and the anticipated delay in consumer-grade 5G adoption.

So, the question that begs all of us is: Can LoRA and similar narrowband technologies deliver on the promise of IoT and pave the way for a better future until 5G and Bluetooth finally take over? We’d argue that LoRA seems to have the potential of being a more than able bridge to the connected future. It checks all the right boxes with respect to what LTE lacks and the sacrifices thus made with respect to 5G are minimal, at best.

IoT-based services such as autonomous driving require a real-time response in less than a millisecond. With LTE, however, only delay times in the double-digit range can be achieved. As telecommunications service providers and network operators can make their existing networks fit, is therefore again hotly debated at this year’s Mobile World Congress in Barcelona. Because the solution to this problem, namely the LTE successor 5G, will once again be at the centre of attention at the annual industry meeting of the telco industry. Above all, new achievements, pilot projects and 5G-capable devices will be presented at the MWC. For example, the Bayerische Rundfunk and Telefónica are currently monitoring the TV transmission via the new network standard. The Port of Hamburg has been exploring the applicability of 5G together with Telekom and Nokia since 2017. In addition, Telefónica wants to test-equip two Spanish cities with 5G technology in the next three years. In addition to the telecom industry, the automotive industry is more than willing to push the fifth generation network. Among others, Bosch, Vodafone and Huawei 5G test for autonomous driving on a section of the A9 in the context of the pilot project “digital test field motorway”.

But despite promising pilot projects, the new network standard is not yet in sight, at least in Europe and North America. The situation in India, is far worse. In Germany, distribution will at best be delayed until 2020. Only now has the Federal Network Agency given the go-ahead for the awarding of 5G frequencies in Germany. In addition, Telekom estimates that the fifth-generation network will require € 500 billion in investment across Europe. Because 5G is not a mere extension of LTE, antennas must be renewed, fiber optic networks laid and expanded, and additional transmission towers set up, that is, a completely new infrastructure to be built.

Until then, low-power wide-area technologies, such as Narrowband IoT (NB-IoT), Sigfox and LoRA, offer promising alternatives. Benefits such as the low power consumption of IoT terminals, low module cost and maintenance, low latency, high building penetration, and the ability to transmit data over long distances characterize the LPWA low-traffic network. Without having to build a completely new infrastructure, as in the case of 5G, NB-IoT can be implemented in existing LTE networks via software upgrades. The scalability of NB-IoT makes it possible to connect millions of endpoints in a single network. Thus, NB-IoT will be the most attractive bridge technology by 2020.

The technology is particularly useful in the fields of smart cities, smart metering, agriculture and logistics. In five years, there are already five billion LPWA connections worldwide, according to market analysts from Strategy Analytics. NB IoT projects are mainly in the B2B sector, for example in the rail network, smart metering or smart cities with pilot projects for parking guidance systems.

Telecommunications providers can now monetise IoT transactions via NB-IoT. For example, by providing smart city operators with information for security, lighting and parking. Telcos can also leverage new revenue streams through service level agreements for critical IoT devices and services. But especially in the B2B area, SLAs are correspondingly strict and the demands on service quality are high. And as with almost all network technologies, NB-IoT transmission errors and packet loss can occur. Monitoring the network is therefore advisable. Also, to avoid SLA penalties, it can help to monitor the network closely and ensure that all processes run optimally.

Quality of the LPWA network must be ensured

A suitable monitoring software for the network shows which components communicate with each other and thus makes dependencies transparent. Even sudden changes can be detected – whether the response time behavior of a system changes, the volume of data unexpectedly rises or falls, or servers no longer respond within the Quality of Service level. For NB-IoT to serve as a bridging technology on the way to 5G, telcos and companies need to know how to ensure the availability, reliability, responsiveness, and security of delivering IoT services to their networks.

LoRA and the Indian Perspective

India was among the last countries in LTE adoption. It had decidedly failed to jump on the 4G bandwagon, and when the world was enjoying LTE grade internet speeds, more than two thirds of India’s internet using population was stuck at 2G and 3G grade speeds. In a country that has generally been a slow mover in adoption of new technologies, the question whether India would have the apt infrastructure for 5G in time is of immense importance.

When North America and Europe have found it hard to implement 5G quickly, one would be hard pressed not to believe that India, and similar emerging economies, would be running at least 4-5 years behind their western counterparts. The IoT is an important sector for India- one it should actively pursue, if it wishes to dethrone China as the world’s manufacturing capital. Smart factories would function entirely on the IoT and IIoT, and if India’s factories fail to adapt to these demanding changes, foreign companies would have no incentive to set up their manufacturing bases here.

Thus, LoRA becomes of prime importance in emerging economies, including India, Africa, and South America. But, has there been enough done to suffice for the lack of 5G and even LTE? The answer to that question is quite multifaceted. For one, there have been a number of projects initiated in India that actively rely on LoRA and LPWA, but most of those projects are aimed at either solving the agrarian crisis, or simply in elevating the standard of living in some economically backward Indian states.

For instance, in a benchmark move in 2016, the Government of Andhra Pradesh entered into collaboration with Microsoft and ICRISAT (International Crops Research Institute for Semi-Arid Tropics) for technology-based analysis of soil parameters, weather conditions, and other key stats. The entire system is operated on the basis of artificial intelligence (AI), machine learning, and of course, secure cloud computing – and it sends text messages to the farmers mentioning important information, like correct sowing times.

While these projects are aimed at solving a number of domestic issues that face India, projects that can be deemed are still a rare occurrence. Whether or not we’ll see these small scale projects manifest into something of much bigger significance and find their way into factories of tomorrow is a question that begs an answer immediately.