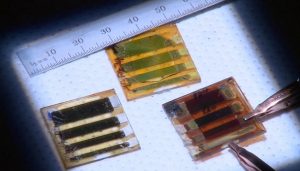 US researchers are working on 2D perovskite crystals as a potential material for solar cells.

Perovskite-structured materials are causing a stir in the world of solar power conversion, going from  just-working to exceeding the efficiency of some conventional materials in only a few years.

However, they have some serious drawbacks which are keeping them from practical application.

“The challenge has been to find something that works better than 3-D perovskites, which have remarkable photo-physical properties and power conversion efficiencies better than 20%, but are still plagued by poor performance in stress tests of light, humidity and heat,” said Los Alamos National Laboratory, suggesting that 2D perovkites might be more practical in solar cells.

“Crystal orientation has been a puzzle for more than two decades, and this is the first time we’ve been able to flip the crystal in the actual casting process,” Rice University scientist Hsinhan Tsai, working at Los Alamos. “This is our breakthrough, using our spin-casting technique to create layered crystals whose electrons flow vertically down the material without being blocked, midlayer, by organic cations.”

“Outstanding” stability and more than triple the material’s previous power conversion efficiency are claimed for the 2D perovskite.

The two-dimensional material, that orients its layers perpendicular to the substrate, was initially created at Northwestern University.

2-D crystals previously studied by the Northwestern team lost power when the organic cations hit the sandwiched gap between the layers, knocking the cells down to a 4.73% conversion efficiency due to the out-of-plane alignment of the crystals. But applying the hot casting technique to create the more streamlined, vertically aligned 2-D material seems to have eliminated that gap. Currently the 2-D material has achieved 12 percent efficiency.