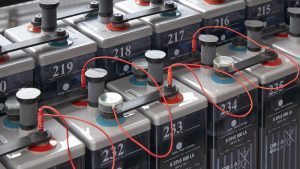 Power management devices remain a strong interest item at the biennial tradeshow. Here are some of the interesting power developments from Electronica 2016.

It saddened me to have missed Electronica this year. Southern Germany is very much like New England in the fall. The leaves on deciduous trees turn yellow, orange and red, and fall from the trees. The walk from the Ubahn subway stop to my hotel in north eastern Munich is a slosh-slosh-slosh through fallen leaves. The air is cold and damp, and the glow from the Marriott is warm and welcoming, like a Currier and Ives painting.

With 73,000 visitors from 80 countries (2,913 exhibitors), Electronica remains one of the world’s largest trade shows, but, occupying the grounds of the old Munich airport, visiting exhibits can be exhausting. Many of the exhibitors serve buffet food for their guests (often sausages and meatballs). In the “olden days,” women in domestic’s costumes — “cigarette girls” — would walk the trade show aisles selling smokes. Exhibitors would light up in their booths. These days Europe follows America in banning smoking in practically all public places.

Peter Clarke’s Electronica summary expressed a different kind of nostalgia: Siemens-Nixdorf and Olivetti are no more, he points out. The computer industry has long since deserted Europe. Former cellphone leaders Nokia and Ericsson are no longer marketing targets for component makers at Electronica. It was free trade agreements and the American elections that seemed to dominate show floor discussions, Peter wrote. But Germany is far from a case study for industrial decline. Rather, the country demonstrates worldwide leadership in automotive electronics (e.g., Audi, BMW and Daimler) — as well as the growing industrial base of small to mid-sized companies.

“We have seen the European chip companies Infineon, NXP, STMicroelectronics, AMS and others turning away from the three Cs,” Peter writes, “towards automotive, transportation, industrial, renewable energy and energy distribution applications.” Qualcomm — the world’s largest smartphone chipset provider, as one example — used Electronica to demonstrate its automotive potential rather than its mobile communications legacy, Peter noted.

Electronica is the place where you might go to get a pitch on Industry 4.0, a remodeling of the industrial world, with precision digital monitoring and control. A fair number of the products promoted at Electronics would likely find a place on the Internet of Things (IoT). It made me pay attention to the product introductions landing in my email basket days and weeks before opening of the trade show (November 8th). Power management was the dominant theme of these releases. American component suppliers pitching their Electronica products to me — from DC-DC converters to power transistors — were all involved in power management. I took notes.

In this implementation, high-accuracy battery stack monitors are coupled with the company’s SmartMesh network, replacing the traditional wired connections between the battery packs and the car’s battery management system — losing the weight of a wiring harness, and promoting greater battery life and efficiency. The company’s mesh network (an inheritance from its acquisition of Dust Networks) promises better than 99.999% guaranteed connectivity. The LTC6811 battery monitoring IC, paired with LION Smart’s Open’s battery management software enables fast charging times (15 minutes) for electric vehicles, an energy capacity of over 55kWh, with an electric vehicle range of over 400km.

GaN transistors is another class of power devices receiving a lot of attention (we believe) at Electronica. The key to compact and efficient power supply design is faster DC pulse generation. It also applies to inverters, power adaptors and battery chargers, and motor drive circuitry. The promise of gallium nitride is that it provides a much higher switching frequencies than silicon MOSFETs, enabling smaller outboard components (e.g., capacitors and inductors) and incremental higher energy transfer efficiencies.

GaN Systems reports its enhancement mode power FETs are being deployed in very small, high-density commercial inverters, and motor controls — as well as battery chargers and energy storage systems. Compared with a silicon design, GaN transistors can reduce the size of a 48 V, 12 kW motor drive by a factor of 5 (and the weight comes down by factor of 3). They are on their way to becoming mainstream in transportation, consumer, and industrial machine tool applications, GaN Systems claims. Semiconductor companies displaying GaN Systems’ transistors into their power systems include Analog Devices, and Linear Technology.

Products for industrial appliance control. Maxim Integrated is also trading on switching speed with an octal high-side switch and driver for Industry 4.0 applications. For most industrial applications (motor drives, machine tools and robotics), a high-side switch is used to control inductive loads. With fast switching, the design challenge is to rapidly discharge the energy in the inductor when the power pulse goes to zero. (Some manufactures use fast recovery diodes for this.) Otherwise, stored energy in the inductor — called “back EMF” —could generate a considerable amount of heat on the driver circuitry.

The MAX14913 offers a safe-demagnetization feature, which can discharge and demagnetize any inductive with integrated clamps. The MAX14913 is included within the companies Pocket IO PLC — a development platform for programmable logic controllers showcased at Electronica. With a growing footprint in programmable logic controllers, Maxim is betting its fast octal switch will find its way into Industry 4.0 applications (particularly machine tools using PLCs).

ON Semiconductor used Electronica to show some highly-integrated solutions for Power Management and Control. For appliance control (a Fairchild Semiconductor specialty before it was acquired by ON Semiconductor), the company demonstrated 600V power factor controllers (PFCs) and inverter modules, suitable for driving 3-phase motors. This will simplify implementations, shortening time-to-market, the company believes.

While the Fairchild exhibit booth space was reported to be empty (contributing, no doubt, to the furtive-but-not-quite-correct-feeling that Electronica had shrunk from previous year’) Electronica attendees found their way to the ON Semiconductor exhibit in another hall. The demonstrated products covering power technologies included an 800 W motor driver system solution (featuring the STK5Q4U3xxJ intelligent power module) and NCP1631 PFC controller. The motor drive system is also implemented with ON Semiconductor’s NCP1063 AC/DC power regulator.

At Electronica, Texas Instruments promoted a current sense amplifier for in-line motor phase current measurement and higher motor efficiency. The INA240 offers enhanced pulse width modulation (PWM) rejection for systems running at up to 80 V to support a variety of applications such as motor control, solenoid triggering and power delivery. The amplifier, TI suggests, is a key enabler for the Smart Factory Industry 4.0.

Nexperia, the future name of NXP’s the standard products groups, made its presence felt at Electronica. This group makes business of power discretes (including MOSFET and GaN transistors) used automotive, industrial, and computing applications, consumer and wearable applications. Nexperia is upgrading its UK chip fab from 6in to 8in wafers to accommodate the increase in power discretes demand it anticipates. “But development for GaN manufacturing, using GaN-on-silicon wafers, in mass production with a low cost point,” Nexperia says, “is not a piece of cake.”