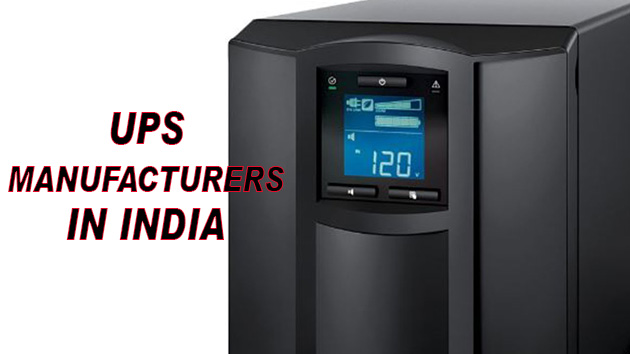 Power is an important topic, especially, in a land as big and as diverse in India. If you really see, the issue of power and energy in India can be highly divisive- in the way that for a person sitting in Lutyens Delhi, and for a person from the countryside, the energy requirement per day is hugely disproportionate.

So, in a nation where electricity can often be scantily available, Uninterrupted Power Supplies (UPS) emerge as a key place for energy storage in times of a power cut. Several reports claim that come 2021, India’s UPS industry will reach USD 1.2 billion- and that is a very big number.

A number of companies have been making UPS’ in India for a long time now. We have compiled a list of the top 10 UPS manufacturers in India. Take a look:

APC by Schneider Electric is an industry leader in this space and they provide reliable and innovative solutions that help keep the power on, and the data flowing. From battery backups that safeguard against outages at home, to full-scale data center infrastructure, they help your home and business become more efficient, reliable, and connected. That’s Certainty in a Connected World. They offer two broad product categories – APC Back-UPS and APC Back-UPS Pro, especially manufactured for people working remotely to enable them with ‘uninterrupted and continuous connectivity’.

Leading the UPS race in India is Luminous Power Technologies courtesy of its broad portfolio of energy backup solutions that include UPS, and other batteries for certain solar applications. Luminous has seven manufacturing plants spread out in the states of Himachal Pradesh and Maharashtra.

Like Luminous, Su-Kam has been a prominent name in the UPS market, and is often the go to brand of most Indian consumers. The firm was founded more than two decades ago and today has customers in more than 70 nations around the world. Su-Kam is popular for its home inverters and UPS. Like Luminous, Su-Kam also has seven manufacturing plants spread across Himachal Pradesh and Haryana along with Nepal.

What makes Genus Power really stand out on this list is that it has a team capable of doing some very high level and sophisticated R&D- which has also been approved by the Ministry of Science and Technology. It is a part of the highly valued Kailash Group and has five manufacturing facilities in India.

For most of the young people out there, Microtek must be a very familiar name because it was generally people’s first choice UPS when they got a computer. The good news is that Microtek has been on the forefront of India’s UPS market with more than 300 service points and 50 service centres which offers its customers an end to end energy storage solution from purchasing to servicing. In addition to that, Microtek has five manufacturing facilities in India, and that makes it among the top UPS manufacturers in India.

A subsidiary of the Amara Raja Group, Amara Raja has contributed immensely in shaping the Indian UPS market. The Amara Raja Group posted a total revenue of USD 1.2 billion in FY 18 and a big contributor to that has been the group’s consumer power segment that is sold under the brand name ‘Tribal’ which has power management and storage systems based on renewable energy like solar.

Since its inception in 1983 to today, in nearly three decades of existence, Hitachi Hi-Rel has established itself among the top UPS manufacturers in India and the world. The firm boasts of being targeted towards mission critical applications like refineries and petro-chemicals. Its R&D centre in India has been recognised by the Indian government where a lot of products like Industrial UPS, IT UPS, and Medium & High Voltage Multi Level IGBT Drives among others. The firm has two manufacturing facilities in Sanand and Gandhinagar.

Joining the list is another pioneer in India’s UPS market that dictates a considerable market share thanks to its clientele that is situated in more than 12 countries around the world. What gives the firm such manufacturing prowess is its eight manufacturing facilities located in in Chennai, Parwanoo, Pondicherry and Maphe

Consul has been in operation for more than three decades and is a leading light in India’s power electronics market. They manufacture power storage solutions like industrial inverters, online UPS, solar inverters and isolation transformers among others. The firm has two manufacturing facilities in Pune and Chennai.

Delta Power is a subsidiary of Thai firm Delta Electronics with two manufacturing and two R&D facilities in India. Among the major power storage systems offered by the firm are UPS systems, and other renewable energy products.

True Power was established in 1993 and has made a name the top UPS manufacturers in India courtesy of progressive vision and zeal for technological innovations. The firm has a manufacturing facility located in Parwanoo along with a solid R&D department.

So, there you have it. These top 10 UPS manufacturers are only among a host of other firms that are contributing to the energy storage and power-backup market in India.

*This list of the top 10 UPS manufacturers in India is a result of the editorial decision of ELE Times.

If you want to know about the top battery manufacturers in India, click here.