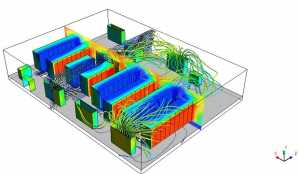 When you watch a movie on your laptop, the fan almost immediately starts to sound like a jet engine, and feels warm enough to start a fire. If you leave your smartphone in the glove box in the summer, it won’t work until it cools down.

Keeping electronics on a reasonable temperature is not magic, although it may feel like it at times if you aren’t very familiar with the rules and situations.

When current flows through a resistor, power is dissipated in the form of heat. With electronic gadgets becoming progressively smaller, heat management is an increasing concern. Unless removed, heat accumulates within the product causing the temperature to rise and leading to failure. Three physical processes control the movement of heat—conduction, convection, and radiation—with heat flowing from a region of higher temperature towards a region of lower temperature. When dealing with heat management, it is also necessary to deal with two additional factors: thermal resistance and coefficient of thermal expansion.

All material expand, or contract to a certain degree, when heated. This is an important factor in electronics, especially as many components have interleaving bonding of metallic and non-metallic surfaces with different coefficients of thermal expansion. Therefore, to manage temperature, electronic designs have to consider the effects of conduction, convection, radiation, thermal resistance, and coefficient of thermal expansion.

Two common causes of heat on printed circuit boards are:

Heat generated by these sources raises the temperature and radiates to the surrounding components, heating them up as well.

Managing heat cannot be an afterthought. The basic design has to aim at generating the lowest amounts of heat. Unless the design deliberately addresses the issues of heat generation, control, and management, the device is bound to have a short operational life. There are a myriad of ways to approach heat management. The simplest could be to reduce the amount of heat created by your product. Microprocessor manufacturers over the last two decades have struggled with keeping the temperature of their products at a reasonable level as they produce a large amount of heat in a very small area. Decreasing the voltage, and therefore power consumption, also has been very successful in the past. But, there are other ways to decrease the power output at more of a board versus IC level.

Any power conversion is a great opportunity to find savings in heat and efficiency, such as replacing a low drop-out voltage regulator with a switching regulator. With the shrinking size of electronic gadgets, manufacturers are making smaller and smaller SMDs. However, reducing the physical dimensions of SMDs also reduces their surface area and consequently, limits the heat that can dissipate to the surrounding air. The only way for such components to lose heat is through the solder joints to the copper track holding them to the PCB. You can remove heat from SMDs in three ways:

In multi-layer boards, designers commonly use several layers of copper as an effective means of reducing EMI/EMC and for providing signal integrity. Because copper layers have a surface area as large as the dimensions of the board, they are highly effective in removing heat.

Even providing wide or thick traces may not be effective without the proper components. Nearly all components have a power rating. Designers must take care to select components with power ratings that will not exceed what is required in the circuit, preferably with a safety margin to spare.

Modern electronic equipment operate fast enough so they don’t need to be running all the time. For instance, Remote Terminal Units (RTU) can afford to sleep unless woken up by a sensor signaling a change in the operating conditions. During the sleep phase, the micro-controller within the RTU consumes very little power. By reducing the amount of power consumed, the designer can limit the heat generated by the unit as well.

There are times that the amount of heat generated cannot be reduced, at which point the heat must be removed. The first step of heat remediation is to set goals. Establish what levels are acceptable, then identify which devices are most susceptible to heat, as well as what devices create the most heat. If these items are not documented, it is difficult to balance the different trade-offs that will be necessary in the design process.

Directly after setting those goals, establish your constraints. While all electronics ideally would be placed directly in the flow of dry, cold, clean air, the reality is that most electronics are in very tough environments – e.g. cell phones reside next to warm bodies, computers are placed in dusty office corners with restricted airflow, and embedded systems are placed in airplane locations with wildly oscillating pressure, temperature, and humidity conditions.

After setting goals and considering environmental conditions, engineers can select one or more methods to keep the electronics cool. Some of the more popular methods are:

Using Natural Convection: This is the most inexpensive solution for cooling electronic equipment. Since hot air is lighter, air near a hot component moves upwards, allowing cool heavier air to replace it. The cooler air then removes heat from the component and in turn, heats up and rises, helping to cool the components. However, this method only works when free air is available for circulating around the hot electronic device, and when the circulating air is at a temperature lower than the hot components.

When there is an enclosed restricted space, natural convection has a limited effect—until the entire volume of air in the space reaches the temperature of the component—after which, heat continues to build up inside the component, raising its temperature and of the air surrounding it.

To use natural convection most effectively, designers must take care to place heat-producing components at the top of the assembly, so that the rising hot air from these components does not affect the heat-sensitive ones. They must also ensure free airflow around the heat producing components.

Using Forced Convection: Air is not a good conductor of heat, which means air takes time to heat up. Consequently, the efficiency of using natural convention to remove heat depends on the rate of volume movement of the air around the hot component, and the surface area the hot component presents to the surrounding air. For this reason, engineers use fans and heat sinks to improve the efficiency.

Using a fan speeds up the volume movement of air, resulting in a faster exchange of hot air with cooler air. However, this alone may not improve heat removal unless the surface area of the hot component increases as well—by the use of a heat sink.

Using a Heat Sink: To increase the effectiveness of passive or active heat removal, heat sinks are sometimes used. Heat sinks are made from copper or aluminum, with large number of fins presenting a much-enlarged surface area compared to that of the component. Consequently, the heat sink is in contact with more air and therefore, is able to transfer more heat. It is important to remember that heat sinks do not make heat disappear; all they do is expedite the movement of heat from one point to another.

Using Fans: In conjunction with a fan, the use of a heat sink is very effective in keeping electronics cool. However, extra power is necessary to run the fan, and the presence of the heat sink icreases the weight of the product, plus they can be noisy. Also, extra components are necessary to detect if the fan is running and to shut down it down if not. All this in­creases the physical size and cost of the product. If possible, avoid fans, but if not possible, use them with caution.

Using Coolants: Applications with space limintations cannot use fans for cooling. To cool heat sinks in such applications, engineers use special coolants. These are fluids with high latent heat capacity and good thermal conductivity. The heat sinks are also special, with a maze of pipes running through them, carrying the coolant, which absorbs heat from the heat sink.

The hot fluid rises through pipes attached to the heat sink to a heat exchanger outside the restricted application space. Here, fans help the coolant to dissipate the absorbed heat to the surrounding atmosphere. The cooled coolant flows down into the heat sink through another pipe, and the process repeats. Although expensive, using a coolant is a highly effective method of managing heat.

Heat, unless deliberately used for raising the temperature of an object, is a waste product of any operation, reducing its operational efficiency. Engineers aim to improve the operational efficiency of a product by allowing it to generate little heat as possible in the first place, and then managing its removal as best as they can, using methods outlined above.