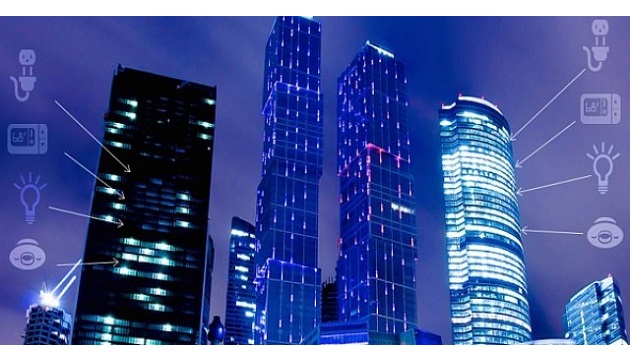 According to the Vice President of Global Marketing and business development, Russ Sharer, lights are the most prevalent electrical components in any commercial building, and makes them the most logical devices for smart building sensors.

“In new construction you can plan to use standalone smart building control sensors, but only 8% of commercial space is new construction. However, LED lighting retrofits are growing in demand as building owners look to save energy. Connecting these LED luminaires makes the ideal infrastructure for IoT,” he said.

To connect luminaires in new and existing structures building engineers are using wireless technology. While there are lighting-specific wireless control platforms, such as ZigBee, to support an IoT control system it must be able to accommodate all forms of data traffic. In anticipation of IoT networking, luminaire manufacturers are adding Bluetooth mesh capability to LED lighting, which has the advantage of being an open standard that assures compatibility, plus it is readily scalable, added Sharer. And as a broadcast technology Bluetooth mesh has built-in failover and nodes can be added anywhere, anytime.

“By using Bluetooth mesh in new or retrofitted LED lights, you can create a building-wide IoT network capable of controlling lighting and other building systems. For example, LED sensors can monitor a room’s environment to change the lighting, adjust the blinds, or control the HVAC. The same sensors can be used to monitor room occupancy or foot traffic for later analysis, or they can be included as part of a security system. And the infrastructure can be changed or expanded with a simple smart luminaire retrofit,” said Sharer.