Robotic ‘Third Thumb’ Use can Alter Brain Representation of the Hand 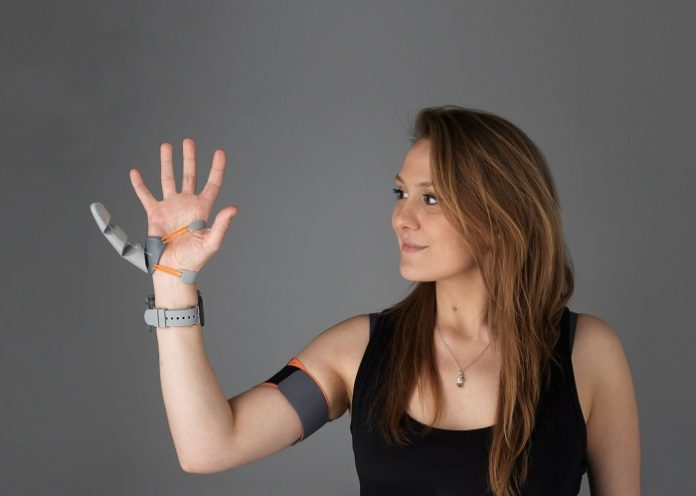 Using a robotic ‘Third Thumb’ can impact how the hand is represented in the brain, finds a new study led by UCL researchers. The team trained people to use a robotic extra thumb and found they could effectively carry out dextrous tasks, like building a tower of blocks, with one hand (now with two thumbs). The researchers report in the journal Science Robotics that participants trained to use the thumb also increasingly felt like it was a part of their body.

Designer Dani Clode began developing the device, called the Third Thumb, as part of an award-winning graduate project at the Royal College of Art, seeking to reframe the way we view prosthetics, from replacing a lost function to an extension of the human body. She was later invited to join Professor Tamar Makin’s team of neuroscientists at UCL who was investigating how the brain can adapt to body augmentation.

Professor Makin (UCL Institute of Cognitive Neuroscience), a lead author of the study, said: “Body augmentation is a growing field aimed at extending our physical abilities, yet we lack a clear understanding of how our brains can adapt to it. By studying people using Dani’s cleverly designed Third Thumb, we sought to answer key questions around whether the human brain can support an extra body part, and how the technology might impact our brain.”

The Third Thumb is 3-D-printed, making it easy to customize, and is worn on the side of the hand opposite the user’s actual thumb, near the little (pinky) finger. The wearer controls it with pressure sensors attached to their feet, on the underside of the big toes. Wirelessly connected to the Thumb, both toe sensors control different movements of the Thumb by immediately responding to subtle changes of pressure from the wearer.

For the study, 20 participants were trained to use the Thumb over five days, during which they were also encouraged to take the Thumb home each day after training to use it in daily life scenarios, totaling two to six hours of wear time per day. Those participants were compared to an additional group of 10 control participants who wore a static version of the Thumb while completing the same training.

During daily sessions in the lab, participants were trained to use the Thumb focusing on tasks that helped increase the cooperation between their hand and the Thumb, such as picking up multiple balls or wine glasses with one hand. They learned the basics of using the Thumb very quickly, while the training enabled them to successfully improve their motor control, dexterity, and hand-Thumb coordination. Participants were even able to use the Thumb when distracted—building a wooden block tower while doing a maths problem—or while blindfolded.

Designer Dani Clode (UCL Institute of Cognitive Neuroscience and Dani Clode Design), who was part of the core research team, said: “Our study shows that people can quickly learn to control an augmentation device and use it for their benefit, without overthinking. We saw that while using the Third Thumb, people changed their natural hand movements, and they also reported that the robotic thumb felt like part of their own body.”

The first author of the study, Paulina Kieliba (UCL Institute of Cognitive Neuroscience) said: “Body augmentation could one day be valuable to society in numerous ways, such as enabling a surgeon to get by without an assistant, or a factory worker to working more efficiently. This line of work could revolutionize the concept of prosthetics, and it could help someone who permanently or temporarily can only use one hand, to do everything with that hand. But to get there, we need to continue researching the complicated, interdisciplinary questions of how these devices interact with our brains.”

Before and after the training, the researchers scanned participants’ brains using fMRI, while the participants were moving their fingers individually (they were not wearing the Thumb while in the scanner). The researchers found subtle but significant changes to how the hand that had been augmented with the Third Thumb (but not the other hand) was represented in the brain’s sensorimotor cortex. In our brains, each finger is represented distinctly from the others; among the study participants, the brain activity pattern corresponding to each individual finger became more similar (less distinct).

A week later, some of the participants were scanned again, and the changes in their brain’s hand area had subsided, suggesting the changes might not be long-term, although more research is needed to confirm this.

Professor Makin added: “Evolution hasn’t prepared us to use an extra body part, and we have found that to extend our abilities in new and unexpected ways, the brain will need to adapt the representation of the biological body.”