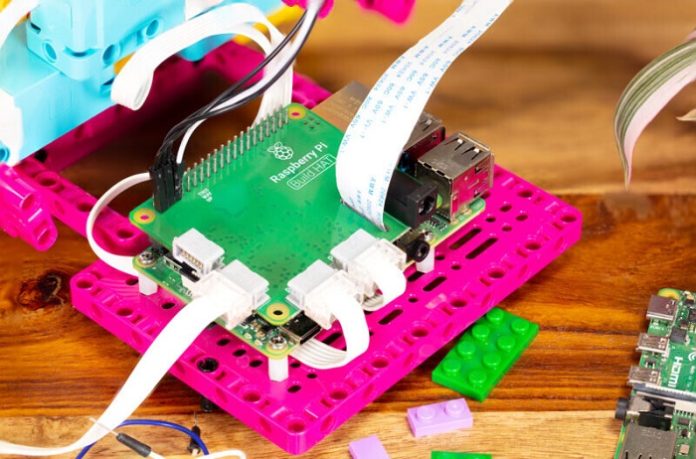 The Raspberry Pi Foundation is the maker of the Raspberry Pi, a line of inexpensive, bare-bones, single-board computers that are typically sold as a tiny circuit board with only the necessary components attached. Buyers can add a cover, keyboard, mouse, display, etc. It has been designed for use as an educational aid, allowing students to learn to program in a very inexpensive way. It has also been adopted by hobbyists who have found many interesting uses for the component. In this new endeavor, the team at Raspberry Pi has designed and built what it is calling the Build HAT (Hardware Attached on Top), which is a device that fits via slots onto the GPIO pins on a Raspberry Pi circuit board. This allows it to control other devices that plug into its four ports, such as those that are part of LEGO’s Education SPIKE. The overall idea is to allow users and enthusiasts the ability to build robots out of LEGO blocks and then control them using programmed devices, such as a smartphone. The Build HAT is run using the Python programming language, and along with its release of the BUILD HAT, Raspberry Pi is also releasing an updated Python library and a new 7.5V power supply that can be used to power not only the LEGO robots but the Raspberry Pi itself. To help users get started, engineers at Raspberry Pi have already built some robots that users can emulate if they so choose using project guides.

In line with its mission to provide users with inexpensive access to cutting edge technology, Raspberry Pi is selling its Build HAT devices for just $25 (the power supply costs $15). Notably, Build HAT will also work with equipment from the Mindstorms Robot Inventor kit.