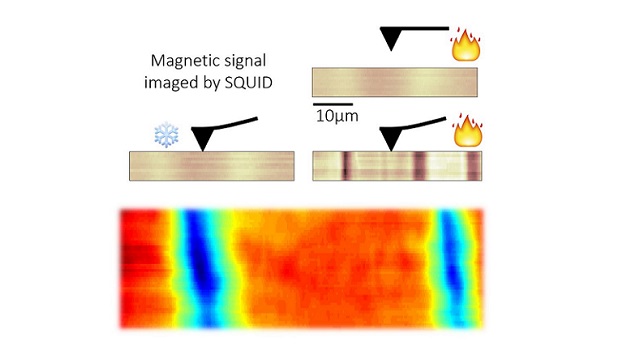 Advances in the technology of material growth allow fabricating sandwiches of materials with atomic precision. The interface between the two materials can sometimes exhibit physical phenomena which do not exist in both parent materials. For example, a magnetic interface found between two non-magnetic materials.

Using very sensitive magnetic probes, an international team of researchers led by Prof. Beena Kalisky, of Bar-Ilan University’s (BIU) Department of Physics and Institute of Nanotechnology and Advanced Materials (BINA) and Prof. Nini Pryds, of Technical University of Denmark’s (DTU) Department of Energy, has found surprising evidence that magnetism emerging at the interfaces between non-magnetic oxide layers can be easily tuned by exerting tiny mechanical forces. The study was the fruit of the collaborative work done by the two PhD students Yiftach Frenkel (BINA) and Dennis Christensen (DTU) with additional researchers from BIU (Israel), DTU (Denmark) and Stanford (USA).

These oxide interfaces combine a number of interesting physical phenomena, such as two-dimensional conductance and superconductivity. “Coexistence of physical phenomena is fascinating because they do not always go hand in hand. Magnetism and superconductivity, for example, are not expected to coexist,” says Kalisky. “The magnetism we saw did not extend throughout the material but appeared in well-defined areas dominated by the structure of the materials. Surprisingly, we discovered that the strength of magnetism can be controlled by applying pressure to the material.”

Coexistence between magnetism and conductivity has great technological potential. For example, magnetic fields can affect the current flow in certain materials and, by manipulating magnetism, we can control the electrical behavior of electronic devices. An entire field called Spintronics is dedicated to this subject. The discovery that tiny mechanical pressures can effectively tune the emerging magnetism at the studied interfaces opens new and unexpected routes for developing novel oxide-based spintronic devices.