Inside Amazon GO- The Probable Future of Retail 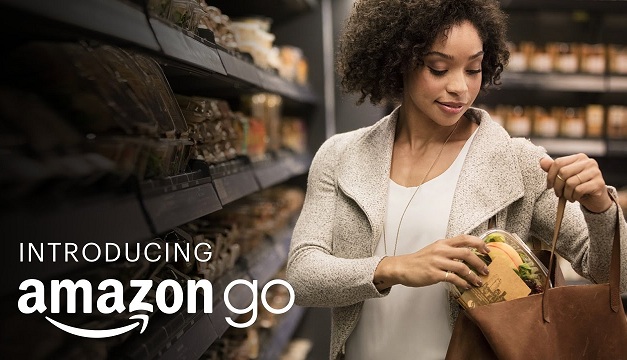 The technology inside Amazon’s new retail store which opened base in downtown Seattle promises a lot of things. And while doing so, it presents a glimpse of the future of convenience stores while enabling a shopping experience like no other, writes Soumyarendra Barik.

If you take the metro to work every day, then there is an eerie similarity you’ll encounter when you first enter Amazon’s new convenience store in downtown Seattle. The fact that this store is different from any other store that you have ever visited occurs to you right at the front door. Just like a metro station, a row of gates guard the store known as Amazon GO. And only those people with the Amazon app on their smartphones are allowed access inside the store.

Given that you enter the store- which you obviously would, a huge 1,800 square foot facility filled with items of every day needs greets you. The items on sale inside the Amazon GO are exactly what you would find in a regular store; the technology, not so much. From soda to potato chips to ketchup to even a live grill, Amazon GO really has it all. 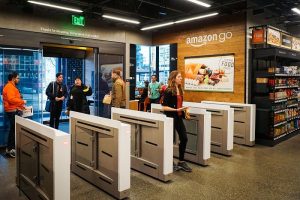 Now, if you’re anything close to being curious, you’d still be stuck at how the store works. The technology inside the store, which to be fair, is fairly tucked away from sight enables an unprecedented shopping experience. Around the store, there are no cashiers, no registers, and the best- no checkout lines. The only people that you will find in the store are either visitors like you or Amazon people that are there to help you get in terms with the technological colossus.

Consider this: you enter the store, pick up what you need and simply leave. There’s no need to pull out cash or a credit card. When you leave, Amazon will charge the amount in your smartphone app. If there was ever any doubt that technology will make our lives easier, it should be shunned- right here, right now.

There are no shopping carts or baskets inside Amazon Go. Since the checkout process is automated, what would be the point of them anyway? Instead, customers put items directly into the shopping bag they’ll walk out with.

Every time customers grab an item off a shelf, Amazon says the product is automatically put into the shopping cart of their online account. If customers put the item back on the shelf, Amazon removes it from their virtual basket.

For now, Amazon says that it has no plans of making another Amazon GO store. For us, it will be an extremely sad thing. However, for those of us who would still love to see what happens in the store, here is a little depiction of that:

But How Does All of it Works?

The only sign of the technology that makes this possible floats above the store shelves — arrays of small cameras, hundreds of them throughout the store. Amazon won’t say much about how the system works, other than to say it involves sophisticated computer vision and machine learning software. Translation: Amazon’s technology can see and identify every item in the store, without attaching a special chip to every can of soup and bag of trail mix.

Let’s take a quick detour to understand the handful of technologies that are working in tandem to make Amazon GO a reality. Machine learning is an application of artificial intelligence (AI) that provides systems the ability to automatically learn and improve from experience without being explicitly programmed. Machine learning focuses on the development of computer programs that can access data and use it learn for themselves.

The process of learning begins with observations or data, such as examples, direct experience, or instruction, in order to look for patterns in data and make better decisions in the future based on the examples that we provide. The primary aim is to allow the computers learn automatically without human intervention or assistance and adjust actions accordingly.

Now, there would be little help if a machine learns everything about you, but then it has no place to store that information. Enter Big Data. Big data is an evolving term that describes any voluminous amount of structured, semistructured and unstructured data that has the potential to be mined for information.

Big data is often characterized by 3Vs: the extreme volume of data, the wide variety of data types and the velocity at which the data must be processed. Although big data doesn’t equate to any specific volume of data, the term is often used to describe terabytes, petabytes and even exabytes of data captured over time. Now imagine, the coming together of companies like Facebook, Amazon, Google, IBM, Microsoft, DeepMind and Apple. These firms have a ton of your data and with their prospective partnership in the future, Big Data will be really big. That means, more Amazon Go’s!

There were a little over 3.5 million cashiers in the United States in 2016 — and some of their jobs may be in jeopardy if the technology behind Amazon Go eventually spreads. For now, Amazon says its technology simply changes the role of employees — the same way it describes the impact of automation on its warehouse workers.

“We’ve just put associates on different kinds of tasks where we think it adds to the customer experience,” said Ms Gianna Puerini, the executive in charge of Amazon Go store.

Those tasks include restocking shelves and helping customers troubleshoot any technical problems.  Store employees mill about ready to help customers find items, and there is a kitchen next door with chefs preparing meals for sale in the store.  Because there are no cashiers, an employee sits in the wine and beer section of the store, checking I.D.s before customers can take alcohol off the shelves.

Most people who spend any time in a supermarket understand how vexing the checkout process can be, with clogged lines for cashiers and customers who fumble with self-checkout kiosks.

At Amazon Go, checking out feels like — there’s no other way to put it — shoplifting. It is only a few minutes after walking out of the store, when Amazon sends an electronic receipt for purchases, that the feeling goes away.

Actual shoplifting is not easy at Amazon Go. With permission from Amazon, New York Times journalist Kyle Johnson tried to trick the store’s camera system by wrapping a shopping bag around a $4.35 four-pack of vanilla soda while it was still on a shelf, tucking it under his arm and walking out of the store. Amazon charged him for it.

A big unanswered question is where Amazon plans to take the technology. It won’t say whether it plans to open more Amazon Go stores, or leave this as a one-of-a-kind novelty. A more intriguing possibility is that it could use the technology inside Whole Foods stores, though Ms. Puerini said Amazon has “no plans” to do so. This makes things that much trickier for India. Here, Amazon has a big stronghold on the e-commerce space. But will India be a market where Amazon will plan to bring this state of the art technology? Chances are that the answer to that question is most likely a big No!

But, there’s some speculation that Amazon could sell the system to other retailers, much as it sells its cloud computing services to other companies. SO maybe, India could get an altered version of the Amazon GO in the near future. Who knows! As for now, visitors to Amazon Go may want to watch their purchases: Without a register staring them in the face at checkout, it’s easy to overspend.