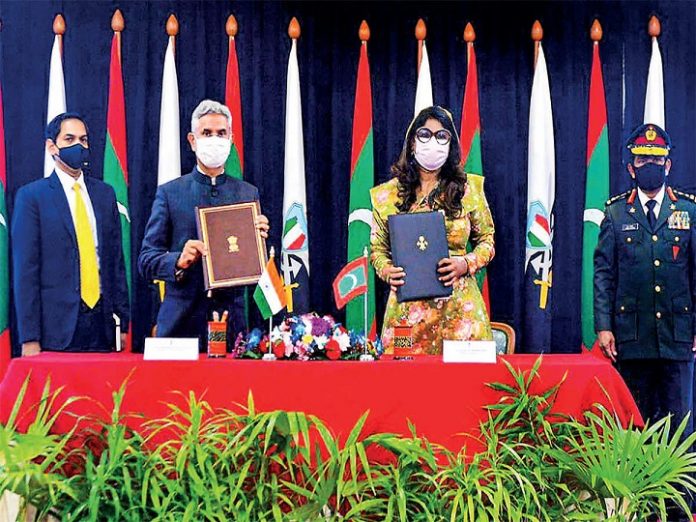 India reiterated its commitment to the Maldives’ security and signed a USD 50 million defence Line of Credit agreement with it to boost the maritime capabilities of the strategic island nation.

Jaishnakar, who is here on a two-day visit, held a “cordial meeting” with the defence minister. “Useful exchange on our defence cooperation. India will always be a reliable security partner for the Maldives,” Jaishankar tweeted. After their talks, Jaishankar and Didi signed an agreement to develop a Coastguard harbour and dockyard at the Uthuru Thila Falhu (UTF) naval base. The agreement was signed under a defence action plan signed in 2016 by then-President Abdulla Yameen Abdul Gayoom during a visit to India.

“Glad to sign with Defence Minister @MariyaDidi the UTF Harbour Project agreement. Will strengthen Maldivian Coast Guard capability and facilitate regional HADR ( Humanitarian Assistance and Disaster Relief) efforts. Partners in development, partners in security,” he said. Didi said it was a great pleasure to welcome Jaishankar. “From time immemorial Defence Cooperation has been a key element of the sisterly relationship that exists between India and the Maldives.

The Coast Guard Harbour & Dockyard at SIFAVARU will mark another significant milestone,” she tweeted. Jaishankar also witnessed the signing of a project execution contract for the construction of roads in Addu, the second-largest urban area in the Maldives in terms of population. He handed over 100,000 additional doses of the COVID-19 vaccine to the Maldives.