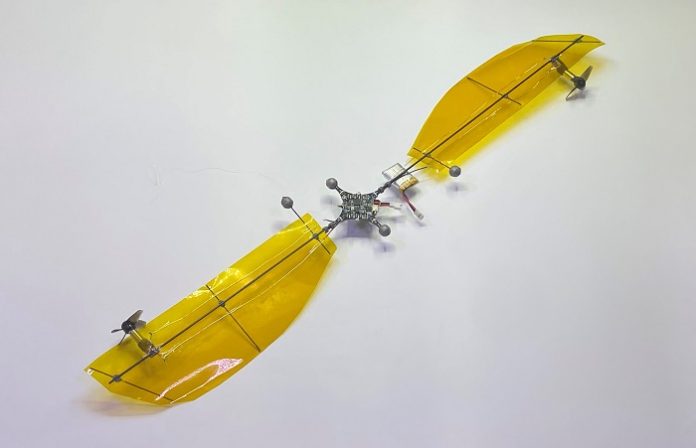 A trio of researchers at the City University of Hong Kong has developed a tiny drone based on the maple seed pod. Songnan Bai, Qingning He, and Pakpong Chirarattananon, describe how they used the maple seed pod as an inspiration for increasing flight time in under 100-gram drones.

Maple seed pods are well known for their helicopter-type design. As they fall from the tree, they spin like a helicopter rotor with no engine, increasing their distance from the tree as they are blown afar. In this new effort, the researchers sought to take advantage of the efficiency inherent in the structure of the maple seed pod to increase flight time for tiny drones. To that end, they built a tiny drone that can spin like the maple seed pod to keep aloft. The resulting drone could fly for nearly twice as long as those with a traditional four-rotor design.

Most drones have spinning rotors to provide lift. This new design features two tiny rotors at the tips of the wings to make them a spin—the lift comes courtesy of the spinning wings, which accounts for its improvements in efficiency. The researchers also added electronics and a battery at the center of the drone. The whole thing weighs less than 35 grams and spins at approximately 200 rpm. Testing showed it capable of hovering in the air for up to 24 minutes. The researchers note that due to the inherent stability of the design, no stabilizing microprocessor is needed. They also noted that they were able to realize position-controlled flight by manipulating the speed of the tiny rotors.

The researchers also tested the ability of the drone to carry a small payload, including a camera. Because the camera spins with the drone, they synched its framerate to coincide with the drone’s spin rate, producing a somewhat shaky but usable video feed. They also demonstrated its ability to carry a 21.5-gram device to conduct mapping and surveillance operations.