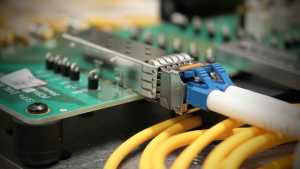 Switches and connector facilitate the sharing of resources by connecting together all the devices, including computers, printers, and servers, in a small business network. The networking marketplace saw dramatic increases in desktop computing power. As application programs grew in complexity and sophistication, the need to send large quantities of data as quickly as possible grew proportionally. The shared-media environment forced all of these communicators to compete with each other for the use of the media.

Network switches examine each data packet and process it accordingly. In this regard, they are more able than another type of network connection called a hub. A hub simply repeats the signal it sees on one port to all the others that contain connections. All nodes connected to a hub see the same traffic. There is no intelligence behind either the data transmission or the determination of which node receives packets.

Most switches are self-learning. They determine the Ethernet addresses in use on each segment and build a table as they pass packets. When the switch receives a frame, it saves the MAC address of the originator and remembers the port on which the frame arrived. This plug-and-play element makes switches an attractive alternative to hubs.

Switches can connect different network types or networks of the same type. Many switches today offer high-speed links, like Fast Ethernet, which can be used to link the switches together or to give added bandwidth to important servers that get a lot of traffic. A network composed of several switches linked together via these fast uplinks is called a collapsed backbone network.

Switches are perhaps three to five times more expensive. Nevertheless, the market for Ethernet switches has been doubling annually. The reason is switch prices have been dropping precipitously, while hubs are a mature technology with small price declines. This means there is far less difference between switch costs and hub costs than there once was, and the gap is narrowing.

Advanced Switching is now possible to find what are called managed switches that are designed for industrial networks. Managed switches are increasingly used in networks containing time-critical devices or where it is important to know immediately when the network has problems. Managed switches often can generate real-time warnings for notable events such as power on/off, traffic overload, configuration changes, and so forth.

Switches generally serve to ease congestion on busy networks. But it is possible to deploy switches in ways that either make traffic worse or fail to improve the situation. A better approach would be to replace the Ethernet segment between the switch and the server with a Fast Ethernet connection. Use of Fast Ethernet in the center of a client-server network almost always relieves network congestion.

A hybrid device is the latest improvement in internetworking technology. Combining the packet handling of routers and the speed of switching, the multilayer switches operate on both layer two and three (data link and network) of the network model. It is also this layer that controls how a computer on the network gains access to network data and gets permission to transmit it, as well as handles frame synchronization and error checking. Let us have a look at the latest switches and connectors in the market.

The Catalyst 9400 Series is the next generation of the industry’s most widely deployed enterprise switching platform. It was recognized as CRN’s 2017 and 2018 Network Product of the Year. These modular access switches are built for security, IoT, and cloud. They deliver state-of-the-art high availability, support up to 9 Tbps, provide the latest in 90-watt UPOE+, and form one of the building blocks for SD-Access, Cisco’s leading enterprise architecture.

TRP Connector/Bel 5GBase-T MagJack™ ICMs offer power of both 60W and 100W with 720mA or 1000mA of current at 57VDC continuous. These ICMs feature a 5GBase-T capable design that is compatible with all known 5GBase-T current-mode and voltage-mode PHYs. The industry standard footprint and pinout makes these ICMs a drop-in replacement for 1G products, no PCB changes needed. TRP Connector/Bel 5GBase-T MagJack™ ICMs are ideal for base stations, high bandwidth wireless access points, and high powered devices like ethernet cameras that require more than 30W of power.

Amphenol Pcd RJFTV Cat6A Ethernet Connectors offer a 10Gb/s Ethernet connection system for a harsh environment. These connectors provide Ethernet class Ea/Cat6A connection for 10 BaseT, 100 BaseTx, 1000 BaseT or 10G BaseT up to 500MHz networks in harsh environments. The RJFTV connectors feature a patented RJStop system that uses RJ45 cordset in a metallic plug and it protects from shocks, dust, and fluids. These connectors require no cabling operation in the field and improve the EMI protection. Typical applications include radars, shelters, and battlefield communication.

The Catalyst 9300 Series is the next generation of the industry’s most widely deployed stackable switching platform. It is recognized as CRN’s 2018 Overall Network Product of the Year. And for security, IoT, and the cloud, these switches form the foundation of Cisco Software-Defined Access, our leading enterprise architecture.

Significant changes for the future

There has been the rise of new and emerging applications and technologies, from artificial intelligence and machine learning to the cloud, data analytics, virtual and augmented reality, and the internet of things (IoT). However, the last several years has seen significant changes in IT, with the world rapidly becoming more data-centric, more software-defined, more distributed and more mobile.

The growing demand for faster speeds, more bandwidth and lower latency has put the network front-and-center in the IT world. Data and applications are no longer confined to central data centers, and they need to move quickly between those data centers, the edge and multiple clouds. Some of the key factors driving the market growth are the need for simplified data center management and automation, high demand for cloud services, and surge in the internet multimedia content and web applications.

The market is expected to grow at the highest rate during the forecast period.  Cisco (US) is one of the leading companies in the switch market, followed by Arista Networks (US), Huawei (China), HPE (US), and Juniper Networks (US) with a large contribution to the parent market share and high financial power, providing a broad product portfolio in the data center switch market with a strong technical expertise. Cisco (US), for instance, is one of the leading global brands in the switching industry and has been leading for many years. The company’s highly innovative Nexus switches use a 16 nm technology, which provides a large end-point density with improved scalability and performance up to 50%. Arista Networks (US) is one of the leading suppliers of integrated cloud networking switching solutions, including extensible operating systems and software innovations.

It is also based on port speed, technology, switch type, industry, and region. Based on technology, the market is divided into Ethernet, InfiniBand, and others. On the basis of switch type, it is categorized into core. On the basis of industry, the market is classified into IT & telecom, government & defense, BFSI, retail, manufacturing, media and entertainment, and others. Based on region, it is analyzed across North America, Europe, Asia-Pacific, and LAMEA along with their prominent countries. These key players adopt several strategies such as new product launch and development, acquisition, partnership and collaboration and business expansion in order to improve receptivity and connectivity.