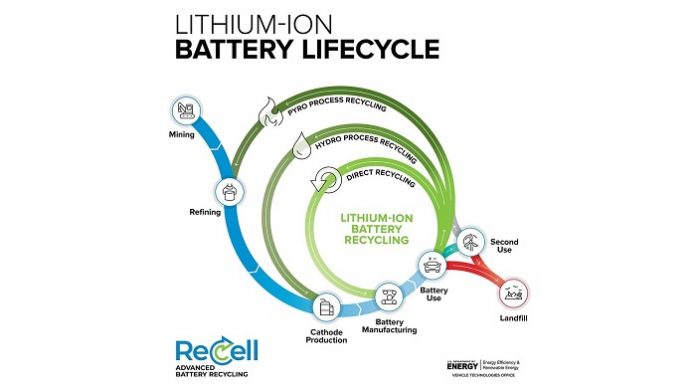 How do we make battery recycling cost effective? Scientists at the ReCell center have taken another step towards that goal. Lithium-ion batteries are the engines of our technological present and future. They power portable electronics, such as smartphones and laptops and electric vehicles (EVs), which are growing in popularity. But the increasing use of lithium-ion batteries, especially in automobiles, has outpaced the technology to recycle them. Now, scientists at the ReCell Center—the nation’s first advanced battery recycling research and development center, headquartered at the Department of Energy’s (DOE) Argonne National Laboratory—have made a pivotal discovery that removes one of the biggest hurdles standing in the way of making recycling lithium-ion batteries economically viable.

The recycling processes being used today enable the recovery of metals in forms that are of low value to battery manufacturers. An enormous problem looms on the horizon: In less than a decade, researchers project that two million tons of end-of-life lithium-ion batteries from EVs will be retired each year. The number of end-of-life EV batteries is currently low, but it’s about to rise substantially as older model vehicles reach the end of their useful life—and the current recycling infrastructure is not ready for the influx.

Researchers at Michigan Technological University (MTU), part of the ReCell team, have developed an innovative process for separating the valuable materials that make up the cathode, a battery’s positively charged electrode.

Scientists in the Materials Engineering Research Facility at Argonne are scaling up MTU’s innovative separation process, paving the way for the large-scale recycling of EV batteries. Because the cathode materials of EV batteries vary depending on the automaker and the production year, a recycler must take a mixture of lithium metal oxides—lithium cobalt oxide, lithium nickel manganese cobalt oxide, lithium nickel cobalt aluminum oxide, lithium iron phosphate, etc.—and separate out each in order for those materials to be reused. That once impossible task

Used for many years by the mining industry to separate and purify ores, froth flotation separates materials in a flotation tank based on whether they repel water and float, or absorb water and sink. Generally cathode materials sink, which makes them difficult to separate from each other. That’s true of lithium nickel manganese cobalt oxide (NMC111) and lithium manganese oxide (LMO), two common EV battery cathode materials that the ReCell team used in its experiments. What the researchers found was that separation can be achieved by making one of the cathode materials, NMC111, float via the introduction of a chemical that makes the target material repel water.

Once the cathode materials were separated, the researchers determined through testing that the process had a negligible impact on the electrochemical performance of the materials. Both also had high purity levels (95 percent or above).

“That’s very important,” says Jessica Durham, a materials scientist at Argonne and researcher, “because if the battery industry is going to buy recycled cathode material to reuse in new batteries, they are not going to sacrifice purity.”

The research ties into the ReCell Center’s mission to advance less energy-intensive processing methods and capture valuable materials for direct recycling—the recovery, regeneration and reuse of battery components directly without breaking down the chemical structure. The center is a collaboration between Argonne, DOE’s National Renewable Energy Laboratory and Oak Ridge National Laboratory, Michigan Technological University, the University of California at San Diego and Worcester Polytechnic Institute.

ReCell’s discovery promises to have wide-ranging implications, such as reducing the cost of recycling lithium-ion batteries; spurring the growth of a profitable recycling market for end-of-life lithium-ion batteries; driving down the cost of EVs for both producers and consumers; enabling the United States to compete in the global battery recycling industry; strengthening U.S. energy independence by increasing the use of domestic sources of recycled battery materials, and reducing U.S. dependence on foreign sources of materials.

But for now, the ReCell Center team is laser-focused on creating, step by step, a complete recycling process for lithium-ion batteries that is economically viable. Only then will it be widely adopted.

“Whatever method is used to do this recycling, the recycler has to be able to profit from it,” Durham says. “We’re putting the steps together knowing that, in the end, the total process is going to have to be profitable.”