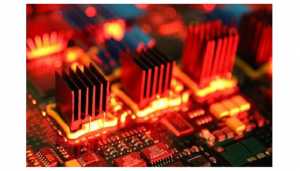 A variety of products have been launched throughout the year, to cater to very intrinsic need of thermal management in electronics manufacturing. These products include resins, heat spreading materials, silicone and non-silicone pastes, adhesives, interface pads and tapes. In the recent years, silicone has been emerged as a good heat absorbing alternative, which offers solutions to several challenges faced in electronics manufacturing, apart from providing designers the freedom to explore new applications and styles.

With high integration in the electronics and LED industries, today, there is a greater demand for better heat-dissipating materials. So materials that exhibit high thermal conductivity and good insulation, have excellent strength even when super thin, and have a low density are getting popular.

ELE Times, in this issue portrays the latest stock of thermal management solutions which are catering the electronics sector immensely. Excerpts:

New coolants (like nanofluids and ioNanofluids) with superior thermal properties are replacing the conventional coolants.

Thermal gap fillers are widely used for mobile and touch screen applications, however, the GF400 range is extremely adaptable and can be used in a multitude of applications from printed circuit board assembly and housing electronic components discretely to automotive electronics, including HEV and NEV batteries, power electronics, LEDs and fiber optic telecoms equipment. 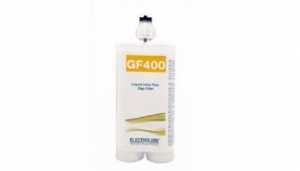 The GF400 has a straightforward mix ratio of 1:1 and a fast cure time of 20 minutes at 100°C, vastly increasing throughput. Alternatively, the gap filler can be cured at 25°C for 12 hours or 90 minutes at 60°C. The new thermal gap filler is UL94 V-O approved and has excellent dielectric strength of 9 kV/mm.

To ensure safe and efficient thermal management of the battery cells and modules, Henkel has a broad portfolio of TIM products, including silicone-free Bergquist Gap Fillers. Recently, Henkel introduced a line of silicone-free, automation-friendly liquid gap fillers, with the debut product offering a thermal conductivity of 3.0 W/m-K. 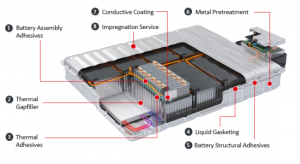 Moreover, Henkel is offering Gap Pad and Sil Pad materials for batteries, as well as thermal adhesive solutions which provide structural shear strength of >10 MPa, allowing different coefficients of thermal expansion to be overcome through high elongation. Typical applications of Bergquist Gap fillers are Automotive electronics (HEV, NEV, batteries), Computer and peripherals, Between any heat-generating semiconductor and a heat sink and Telecommunications.

In reagent storage systems, thermoelectric coolers offer a more efficient, cost-effective and reliable thermal control method compared to other thermal technologies. Thermoelectric coolers, like the CP Series, provide active cooling below ambient temperatures to extend the life of reagents, keep replacement costs down, and ensure laboratory and medical tests are accurate and reliable.

Laboratory and medical technicians use reagents to cause a chemical or biological reaction to measure or identify a target substance. Because reagents react differently to temperature, there is no universal temperature storage standard. Laboratory and medical reagent storage systems have different requirements depending on what they are storing and for how long. Thermoelectric coolers or the Peltier coolers, are the ideal thermal solution because they offer both heating and cooling capabilities to maintain the designated temperature. The CP Series thermoelectric cooler from Laird Thermal Systems is designed for precise thermal control, keeping reagents at their optimal storage and testing temperatures. 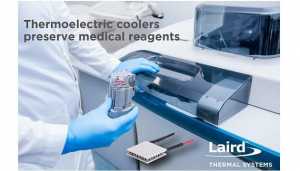 Designed for higher current and larger heat-pumping application, the CP Series offers a cooling capacity of up to 125 Watts in a compact form factor. Featuring solid-state construction with no moving parts, the thermoelectric cooler offers low power, high reliability operation with no noise – all in a small footprint. Solid-state operation also offers design and integration flexibility, as the thermoelectric device can be mounted in any orientation. The CP Series thermoelectric cooler is typically mounted near the reagent storage chamber to closely regulate chamber temperature.

Todaytec launched its high-performance thermal transfer resin ribbon TDR325, offers ultra-high substrate versatility, matte carbon coating and blue back coating. While boasting excellent resistance to smear and scratch (in all the 1KG weight scratch-resistance tests, the number of scratches on Avery pet reaching over a thousand times), it is also characterized by high resistance to alcohol and gasoline (in the 1KG weight alcohol and gasoline resistance tests, the number of scratches on Avery matte silver pet reaching over 100 times). Its high performance enables it to perform excellently in applications in different industries.

Adopting stable superior raw materials, TDR325 ensures a uniform and stable coating on the ribbon surface, preventing toner from coming off. The anti-static back coating protects the print head effectively. In the heat resistance test, after being put before a blast dryer under 50℃ for 5 days, the printing sensitivity, the writing clarity of bar code printer, and the resistance to alcohol and gasoline are almost the same as the printing quality under the normal temperature.

The resin-based polar molecules don’t have any sign of slight decay until eight months later in the aging experiment under normal temperature. Only tiny white spots can be seen in black patches with an optical microscope.

Beating the heat in electronics

A nanocomposite has been invented by researchers of Rice University’s Brown School of Engineering. The nanocomposite combines one-dimensional polymer nanofibers and two-dimensional boron nitride nanosheets. The nanofibers reinforce the self-assembling material while the “white graphene” nanosheets provide a thermally conductive network that allows it to withstand the heat that breaks down common dielectrics, the polarized insulators in batteries and other devices that separate positive and negative electrodes.

The 12-to-15-micron-thick material acts as an effective heat sink up to 250 degrees Celsius (482 degrees Fahrenheit), according to the researchers. Tests showed the polymer nanofibers-boron nitride combination dispersed heat four times better than the polymer alone. 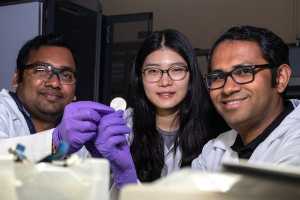 In its simplest form, a single layer of polyaramid nanofibers binds via van der Waals forces to a sprinkling of boron nitride flakes, 10% by weight of the final product. The flakes are just dense enough to form a heat-dissipating network that still allows the composite to retain its flexibility, and even foldability, while maintaining its robustness. Layering polyaramid and boron nitride can make the material thicker while still retaining flexibility, according to the researchers.

In order to address the growing need for better thermal management, researchers in laboratories worldwide are studying promising new materials and approaches to help in paving the way for smaller, more powerful computing and communication technologies.

As consumers demand smaller, faster and more powerful electronic devices that draw more current and generate more heat, the issue of heat management is reaching a bottleneck. With current technology, there’s a limit to the amount of heat that can be dissipated from the inside out.

Back in July 2018, UCLA engineers had developed a semiconductor material, a defect-free boron arsenide, that’s more effective at drawing and dissipating waste heat than any other known semiconductor or metal material. According to the researchers, defect-free boron arsenide offers record-high thermal conductivity and is more than three-times faster at conducting heat than currently used materials, such as silicon carbide and copper. This means that heat that would otherwise concentrate in hotspots is quickly swept away.

In 2013, researchers at Boston College and the U.S. Naval Research Laboratory reported that boron arsenide could potentially perform as well as diamonds when used as a heat spreader. Diamonds have the highest known thermal conductivity, around 2,200 watts per meter-kelvin, compared to about 150 watts per meter-kelvin for silicon.

Following up on that discovery, in July 2018, researchers at the University of Texas at Dallas, the University of Illinois at Urbana-Champaign, and the University of Houston announced they had created a potential heat conduction alternative that, while not as effective as diamonds, marks a significant improvement over silicon.

In March 2018, MIT engineers announced the creation of a new plastic material — a polymer thermal conductor — that functions as a heat conductor, dissipating heat rather than insulating it. The researchers claimed that the new material, which is lightweight and flexible, can conduct 10 times as much heat as most commercially used conventional polymers.

On average, test samples of the new polymer were able to conduct heat at about 2 W/m/K, approximately 10 times faster than what conventional polymers can achieve. In tests conducted at the Argonne National Laboratory, Xu and co-researcher Zhang Jiang, an Argonne physicist, discovered that the polymer samples appeared nearly isotropic, or uniform. Following this reasoning, the team predicted that the material should be able to conduct heat equally well in all directions, increasing its heat-dissipating potential.

By integrating the design of antenna and electronics, Georgia Institute of Technology researchers claim to have found a way to increase the power and spectrum efficiency of a new class of millimeter wave transmitters, allowing improved modulation and reduced waste heat. The result promises to lead to longer talk time and higher data rates in millimeter wave wireless communication devices designed for upcoming 5G cellular applications.

Fundamental to the new design is the ability to maintain a high-energy efficiency regardless whether the device is operating at its peak or average output power. The researchers stated that the efficiency of most conventional transmitters is high only at the peak power but drops substantially at low power levels, resulting in low efficiency when amplifying complex spectrally efficient modulations. Moreover, conventional transmitters often add the outputs from multiple electronics using lossy power combiner circuits, exacerbating the efficiency degradation.