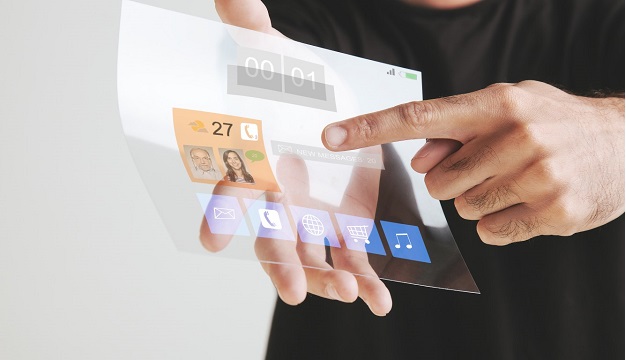 Flexible electronics open the door to foldaway smartphone displays, solar cells on a roll of plastic and advanced medical devices — if we can figure out how to make them.

Nearly everyone knows what the inside of a computer or a mobile phone looks like: A stiff circuit board, usually green, crammed with chips, resistors, capacitors and sockets, interconnected by a suburban sprawl of printed wiring.

But what if our printed circuit board was not stiff, but flexible enough to bend or even fold?

It may sound like an interesting laboratory curiosity, but not to Enrique Gomez, an assistant professor of chemical engineering at Penn State. “It could transform the way we make and use electronic devices,” he says.

Gomez is one of many scientists investigating flexible electronics at the University’s Materials Research Institute. Others are doing the same at universities and corporations around the world.

Flexible electronics are in vogue for two reasons.

First, they promise an entirely new design tool. Imagine, for example, tiny smartphones that wrap around our wrists, and flexible displays that fold out as large as a television. Or photovoltaic cells and reconfigurable antennas that conform to the roofs and trunks of our cars. Or flexible implants that can monitor and treat cancer or help paraplegics walk again.

“If we could make flexible electronics cheap enough, you could have throwaway electronics. You could wear your phone on your clothing, or run a bioassay to assess your health simply by wiping your nose with a tissue,” Gomez says.

Before any of this happens, though, researchers have to rethink what they know about electronics.

That means understanding why conventional electronics are victims of their own success, says Tom Jackson, Kirby Chair Professor of Electrical Engineering. Jackson should know, because he helped make them successful. Before joining Penn State in 1992, he worked on IBM’s industry-leading laptop displays. At Penn State, he pioneered the use of organic molecules to make transistors and electronic devices.

Modern silicon processors integrate billions of transistors, the semiconductor version of an electrical switch on tiny slivers of crystalline silicon.

Squeezing so many transistors in a common location enables them to handle complex problems. As they shrink in size, not only can we fit more transistors on a chip, but the chip gets less expensive to manufacture.

“It is hard to overstate how important this has been,” Jackson explains.

“Remember when we paid for long-distance phone calls by the minute? High-speed switching drove those costs way down. In some cases, we can think of computation as free. You can buy an inexpensive calculator at a store for $1, and the chip doesn’t even dominate the cost. The power you get is amazing.”

That, says Jackson, is the problem. Semiconductor processors are so good and so cheap, we fall into the trap of thinking they can solve every problem.

Consider surgery to remove a tumor from a patient’s liver. Even after following up with radiation or chemotherapy, the surgeon is never sure if the treatment was successful.

“But suppose I could apply a flexible circuit to the liver and image the tissue. If we see a new malignancy, it could release a drug directly onto that spot, or heat up a section of the circuit to kill the malignant cells. And when we were done, the body would resorb the material,” Jackson says.

“What I want,” he says, “is something that matches the flexibility and thermal conductivity of the body.” Conventional silicon technology is too stiff and thermally conductive to work.

Similarly, large, flexible sensors could monitor vibrations on a bridge or windmill blade and warn when they needed maintenance.

“If you want to spread 100 or 1,000 sensors over a large area, you have to ask whether you want to place all the chips you need to do that, or use low-cost flexible electronics that I can apply as a single printed sheet,” Jackson says.

None of the flexible electronics now under development would match the billions of transistors that now fit on silicon chips, or their billions of on-off cycles per second. They would not have to. After all, even today’s fastest televisions refresh their displays only 240 times per second. That is more than fast enough to image cancer in the body, reconfigure an antenna, or assess the stability of a bridge.

So how, exactly, do we make flexible electronics, and what kind of materials do we make them from?

To explain what draws researchers to printing flexible electronics, Jackson walks through the production of flat panel displays in a $2-3 billion factory.

The process starts with a 100-square-foot plate of glass. To apply wires, the factory coats the entire plate with metal, then covers it with a photosensitive material called a resist. An extremely bright light flashes the pattern of the wires onto the coating, hardening the resist. In a series of steps, the factory removes the unhardened resist and metal under it. Then, in another series of steps, it removes the hardened resist, leaving behind the patterned metal wires.

Factories repeat some variant of this process four or five times as they add light-emitting diodes (LEDs), transistors and other components. With each step, they coat the entire plate and wash away unused materials. While the cost of a display is 70 percent that of a finished device, most of those materials get thrown away.

“So it’s worth thinking about whether we can do this by putting materials where we need them, and reduce the cost of chemicals and disposal. It is a really simple idea and really hard to do,” Jackson says.

An ideal way to do that, most researchers agree, would be to print the electronics on long plastic sheets as they move through a factory. A printer would do this by applying different inks onto the film. As the inks dried, they would turn into wires, transistors, capacitors, LEDs and all the other things needed to make displays and circuits.

That, at least, is the theory. The problem, as anyone who ever looked at a blurry newspaper photograph knows, is that printing is not always precise. Poor alignment would scuttle any electronic device. Some workarounds include vaporizing or energetically blasting materials onto a flexible sheet, though this complicates processing.

And then, of course, there are the materials. Can we print them? How do we form the precise structures we need? And how do we dry and process them at temperatures low enough to keep from melting the plastic film?

Fortunately, there are many possible materials from which to choose. These range from organic materials, like polymers and small carbon-based molecules, to metals and even ceramics.

At first glance, flexible ceramics seem like a stretch. Metals bend, and researchers can often apply them as zigzags so they deform more easily.

Try flexing a thick ceramic, though, and it cracks. Yet that has not deterred Susan Trolier-McKinstry, a professor of ceramic science and engineering and director of Penn State’s W.M. Keck Smart Materials Integration Laboratory.

Ceramics, she explains, are critical ingredients in capacitors, which can be used to regulate voltage in electronic circuits. In many applications, transistors use capacitors to provide instantaneous power rather than waiting for power from a distant source.

Industry makes capacitors from ultra fine powders. The tiniest layer thicknesses are 500 nano-meters, 40 times smaller than a decade or two ago. Even so, there is scant room for them on today’s overcrowded circuit boards, especially in smartphones. Furthermore, there is a question about how long industry can continue to scale the thickness in multi-layer ceramic capacitors.

Trolier-McKinstry thinks she can deposit smaller capacitors directly onto flexible sheets of plastic, and sandwich these in flexible circuit board. That way, the capacitors do not hog valuable surface area.

One approach is to deposit a precursor to the capacitor from a solution onto a plastic film and spot heat each capacitor with a laser to remove the organics and crystallize the ceramic into a capacitor. Another approach is to use a high-energy laser beam to sand blast molecules off a solid ceramic and on to a plastic substrate.

As long as she can keep capacitor thicknesses small, Trolier-McKinstry need not worry too much about capacitor flexibility. Previous researchers have demonstrated that it is possible to bend some electroceramic films around the radius of a Sharpie pen without damage.

Of course, not every element placed on a flexible substrate will be small. So what happens if your transistors need to bend?

One way to solve that problem is to make electronics from organic materials like plastics. These are the ultimate flexible materials. While most organics are insulators, a few are conductive.

“Organic molecules have tremendous chemical versatility,” Gomez explains. “My group’s goal is to turn these molecules into transistors and photovoltaic cells.” Easier said than done. The almost infinite number of possibilities available in organic chemistry, he says, make it challenging to find the right combination of structure, properties and function to create an effective device.

Molecules may not be picky about their neighbors, but they still need to form the right type of structures to act as switches or turn light into electricity. Gomez attacks the problem by using a technique called self-assembly. It starts with block co-polymers, combinations of two molecules with different properties bound together in the middle.

“Think of them as a dog and a cat tied together by their tails,” Gomez explains. “Ordinarily, they want to run away from each other, but now they can’t. Then we throw them into a room with other tied dogs and cats. What happens is that all the cats wind up on one side of the room and the dogs on the other, so they don’t have to look at each other.”

Gomez believes this process could enable him to build molecules programmed to self-assemble into electronic structures at very low cost.

“The overarching problem,” Gomez continues, “is figuring out how to design the molecule and then tickle it with pressure, temperature and electrical fields to form useful structures. We don’t really understand enough to do that yet.”

Despite the challenge, flexible electronics promise changes that go beyond folding displays, inexpensive solar cells, antennas and sensors. They could veer off in some unexpected directions, such as helping paraplegics walk again.

Flexible electronics would better match the brain’s springiness. While some researchers are looking at all-organic electrodes, Gluckman believes they are too large and too slow to achieve the resolution he needs. Instead, he has teamed with Jackson to develop a flexible electrode based on zinc oxide, a faster semiconductor that can be deposited on plastic at low temperatures.

The work is still in its early stages, but Gluckman believes they can develop a reliable electrode that lasts for years and produces stronger, clearer signals.

Researchers have already demonstrated that humans can control computer cursors, robotic arms and even artificial voice boxes with today’s problematic electrodes. Yet the results are often short-lived.

“No one is going to let you operate on their brain twice,” Gluckman says. “If you want to directly animate limbs with an implant, the implant has to last the life of the patient. If we can do that, we can enable paraplegics to get around on their own.”

As Jackson notes, computers and smartphones may have powered silicon’s development, but the results are visible in everything from cars and digital thermometers to toys and even greeting cards.

Displays and solar cells are likely to power the new generation of flexible electronics, but brain implants are just one of the many unexpected directions they may take.