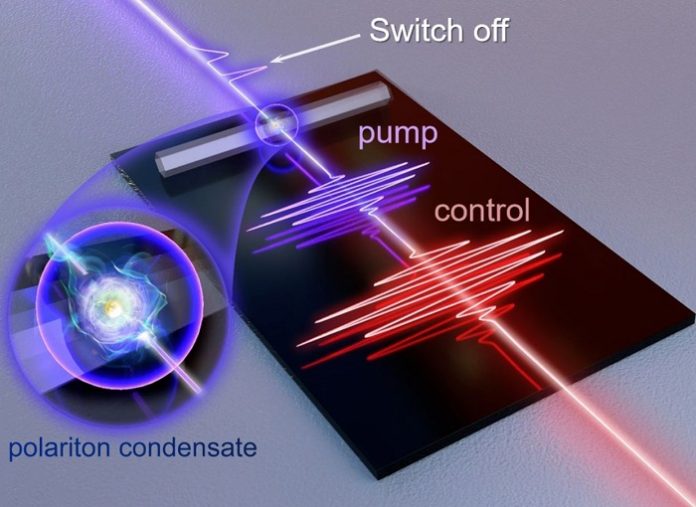 A team of researchers affiliated with a host of institutions in China has developed an ultrafast optoelectronic switch using a Bose-Einstein condensate of polaritons.

As scientists look for ways to create faster devices, they have turned to light as an information transfer medium instead of electrons. In order to create such devices, switches must be developed that can handle the faster medium that operates at optical frequencies. In this new effort, the researchers have designed and built just such a switch—one that allows for processing in the terahertz range.

To build their new switch, the researchers looked to polaritons as a switch mechanism. Polaritons are quasiparticles that can be made using photons and excitons, and they can be used to create Bose-Einstein condensates that are made up of particles that exist in a single quantum state. Polaritons emit light, which is a necessary part of an optical switch. The researchers noted that a Bose-Einstein condensate made using polaritons could act as a polariton laser, another useful feature in an optical switch. The researchers also noted that some semiconductors, such as zinc oxide, can hold excitons at room temperature, a very handy feature.

To create their switch, the researchers began with a sample of zinc oxide, inside of which existed microcavities. Firing an ultraviolet pump pulse at a cavity for a few femtoseconds resulted in a flash of light from the Bose-Einstein condensate inside, lasting the same length of time. More important, turning off the laser resulted in turning off the flash of light very quickly—1,000 times faster than other optoelectrical switches. This was due to the fast extinction rate of the polariton population. The time it takes an optical switch to turn from on to off and vice versa constitutes one of its most important features, and the rate for this new device was found to be several orders of magnitude better than other polariton switches that have been developed thus far: Good enough to put devices using such a switch in the terahertz range.