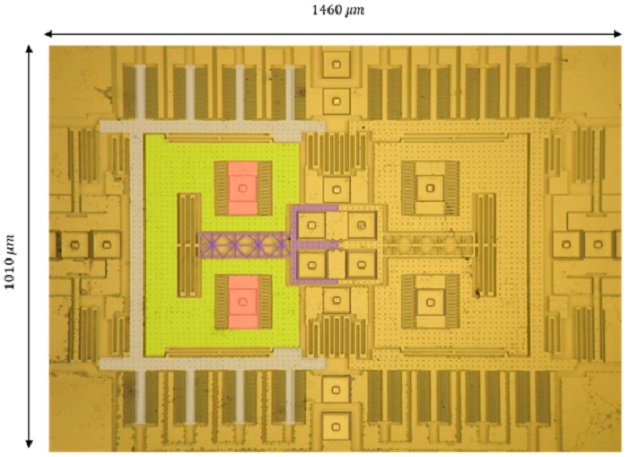 CEA-Leti scientists have developed the world’s first high-performance gyroscope for operating in severe environments, such as industrial and aeronautic equipment and automobiles. The breakthrough proves it is possible to detect minute rotational movement even among system vibrations.

Common in everyday objects, inertial sensors must be designed to meet ever-increasing constraints of miniaturization and cost, as well as requirements for performance and robustness. For certain automotive, industrial and military applications, gyroscopes must be able to detect a variation of one degree per hour, i.e. a speed of rotation about ten times slower than that of the earth, in environments that are subjected to strong, consistent vibrations.

Low-power MEMS gyroscopes are used in multiple fields because of their small footprint and low power consumption. They can monitor and control device position, orientation, direction, angular motion and rotation. Their integration into automobiles improves vehicle stability through an electronic stability-control system. They also can be used for dead reckoning – the determination of a car, ship or aircraft position without the aid of celestial observations – in driverless cars. Their integration into smartphones allows detection of unit rotation and twist (gesture-recognition functions), indoor navigation when GPS is disabled and mixed reality, among other functions.

The devices operate at a given resonant frequency. Parasitic mechanical vibrations rarely exceed 40 kHz. But today, there is no high-performance MEMS gyroscope with a resonant frequency >>20 kHz, above the frequency band of parasitic vibrations. When this frequency is close to that of the vibrations of the environment, mechanical disturbances can distort the measurements. In collaboration with Politecnico di Milano, CEA-Leti researchers overcame this distortion by developing a gyroscope that operates at frequencies in the order of 50 kHz, which is more than two times higher than the capability of conventional MEMS gyroscopes and beyond the frequencies of vibrations common even in severe automotive, industrial and aeronautic settings.

“While various applications are requiring improved robustness to vibrations beyond 20 kHz, state-of-the-art gyroscopes are still operating around this frequency value due to a performance worsening which arises with frequency increase,” the paper reported. “This work proves that NEMS-based gyroscopes can be designed at larger operating frequencies  holding outstanding performance in terms of noise, stability and spurious modes for the considered footprint and (power) consumption.”

“To increase the gyroscope’s operating frequency without reducing sensor performance, CEA-Leti and POLIMI researchers replaced the capacitive detection of MEMS gyroscopes with ultra-sensitive piezoresistive nano-gauges,” said Philippe Robert, MEMS business development manager and senior expert at CEA-Leti. “This new 1.5 mm² high-frequency gyroscope, protected by numerous patents, has characteristics that exceed the state of the art in terms of bias, noise, linearity and other conditions.”

“I have been working on several MEMS technologies for the last 15 years, and for sure the advantages of M&NEMS technology are outstanding for several future applications”, said Giacomo Langfelder, head of the MEMS and Microsensors laboratory at the Department of Electronics, Information Technology and Bioengineering of Politecnico di Milano.

These new devices, which have been manufactured on CEA-Leti’s silicon pilot line, are compatible with processes of most MEMS foundries. Their fabrication is based on the M&NEMS technological platform that, depending on needs, allow the gyroscopes to be co-integrated with a 3-axis accelerometer and/or a high-performance pressure sensor, on a single chip.