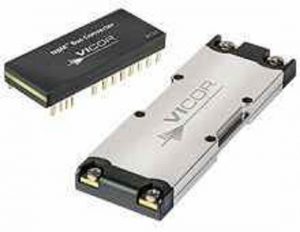 The 2317 NBM is a bidirectional converter capable of providing up to 750W continuously at 48V from 12V, or at 12V from 48V, with over 98% peak efficiency. With up to 1kW of peak power capability (for up to 2ms) in a 23 x 17 x 7mm surface-mount package, the NBM (NBM2317S54D1464T0R) provides a complete solution with no external circuitry needed. By switching at 2MHz, the NBM provides low output impedance and fast transient response to dynamic loads. The NBM incorporates hot-swap and inrush current limiting, increasing power system density and saving valuable board space, time and money.

In data centers that are still relying on legacy 12V distribution, the NBM supports state-of-the-art 48V input GPUs using Power-on-Package (“PoP”) Modular Current Multipliers (“MCMs”) driven from a 48V node sourcing a small fraction (1/48) of the GPU current. Current multiplication overcomes the power delivery boundaries imposed by traditional 12V systems that limit higher bandwidth and connectivity. In data centers that have been upgraded to a 48V infrastructure, the NBM can be used to support legacy 12V loads.

In mild hybrid and autonomous vehicles using 48V, the NBM supports legacy 12V subsystems from efficient power distribution at 48V with or without dual batteries.